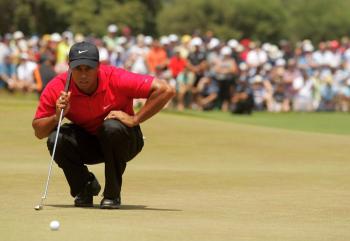 Tiger Woods prepares to putt during the final round of the Australian Masters. (Mark Dadswell/Getty Images)
Golf

By Dane Crocker
Print
Tiger Woods had not played a tournament in Australia for 11 years, since the 1998 Presidents Cup. His appearance this time raised both excitement and controversy among Australians.

Since the Masters was put on by the state of Victoria’s government, Woods’s standard $3 million appearance fee was half footed by taxpayers. Victoria’s Premier John Brumby justified the move citing the economic benefits Woods’s appearance would bring to the region.

Bloomberg.com reported that Australian golfing officials were also keen on making the most of Woods’s trip. Systems to help parents who might inquire about how to get their kids started in golf—a redesign of the PGA of Australia’s Web site and PR campaigns on Twitter and Facebook—all emerged in the lead up to the tournament.

Woods did not disappoint officials or fans in Melbourne.

Entering the final round in a three-way tie, Tiger finished the front nine with a two-stroke lead and never looked back.

He ended up carding a 68 in the final round finishing two shots ahead of fellow PGA Tour player Greg Chalmers.

The Australian Masters, an annual tournament in the PGA Tour of Australasia, was played this year at the Kingston Heath, which has been ranked as one of the top courses in the world.

The crowds that followed Tiger on the final day, and the amphitheaters that awaited him as he strolled up to many greens, made the tournament feel more like a major PGA Tour event than one on a minor overseas tour.

Nearly 100,000 spectators attended the tournament over the four days, with many more following Tiger around on his practice rounds early in the week.

At the awards ceremony, Tiger was presented with a gold jacket—which will surely complement his four green jackets from the Masters in Augusta—and a check for $270,000. The winner’s check was less than 10 percent of his appearance fee.

When asked if he would come back to defend his title, Woods responded, “I would love to!”

At a press conference after the tournament, Woods was asked about the legacy he left behind. “I got a ‘W.' That was the goal this week,” he said.