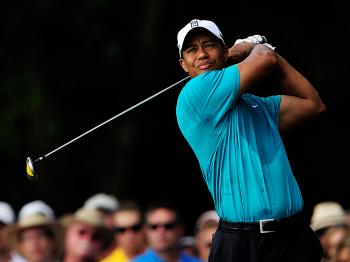 Tiger Woods plays his tee shot on the 12th hole during the second round of The Players Championship at TPC Sawgrass in Ponte Vedra Beach, Florida. (Sam Greenwood/Getty Images)
Golf

Woods, Mickelson Make Cut by One Stroke at The Players

By James Fish
Print
Tiger Woods and Phil Mickelson, competing for the world #1 golf ranking, finished the second round at The Players Championship with identical scores of 3-under, just beating the cut which was 2-under. They are tied for 46th place going into Round Three at TPC Sawgrass.

The top five on the leaderboard all turned in rounds of 65 or 66. Leader Lee Westwood, sitting 12-under, was the only veteran in the top five, followed by Ryuji Imada, Francsco Molinari, and Heath Slocum at 11-under, and Lucas Glover at 9-under.

Greenwood was quite satisfied with his performance. “I played well out there—pretty similar to yesterday actually,” he told PGAtour.com. “I made a couple nice putts, hit it close a lot. Twelve under par is a good total for this golf course.”

Players with earlier tee times had some advantage as the greens were softer and the wind, nonexistent. Later in the afternoon the greens dried out and the wind picked up, making the course a bit more challenging.

Tiger Woods had an early tee time; Phil Mickelson started in the afternoon.

Woods continued to hit erratically, bogeying Eleven, hitting fantastic shots at Twelve and Thirteen, then scoring a double bogey at Fourteen, only to hit an almost perfect second shot at Fifteen for a birdie.

Woods told the post-play press conference on the Golf Channel, that in his estimation he played better on the first day.

“I didn’t quite hit it as good today,” Woods admitted. “Most of my putts were just outside that birdie range—I couldn’t quite get enough close ones.”

“It’s a golf course you have to be so patient on Granted there were a lot of birdie holes today, but still, you can make a some big numbers quick.”

Mickelson, who is right behind Woods in the rankings and poised to take over first, won’t be doing it with the kind of golf her played today. Mickelson also alternated between horrible errors and great saves. The #2-ranked golfer looked to be worn out; possibly the strain of playing through whatever stomach ailment afflicted him last week has left him weakened.

There’s no excuse,” Mickelson told the press. “There was plenty of birdie opportunities out there; I just didn‘t take advantage of them.

“I played mostly from the fairway today and just had trouble getting the ball close. When I did hit good shots I was misjudging the wing or not hitting the right shots. It was a frustrating day. I didn’t play great I didn’t play bad I just didn’t get it going—it was frustrating.”

Mickelson said the course changed a lot during the day.

“I think because the character of the course was changing so much over the course of the afternoon, that the guys that are two, three, four under par and in the tournament,” he said. “Because if they shoot six, seven, eight under par, they’re going to move right up the leaderboard and it’s going to be very difficult for the leaders to pull away in the afternoon.”