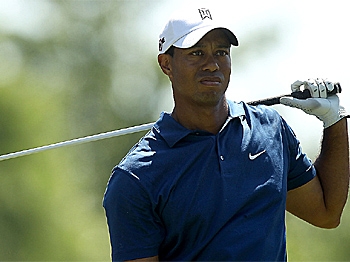 DISMAYED, REJECTED: Tiger Woods reacts to a poor tee shot on the 9th hole during the second round of the Quail Hollow Championship. (Streeter Lecka/Getty Images)
Golf

By James Fish
Print
Tiger Woods, despite his showing at Quail Hollow, one of the worst weekends in his professional career, remains the #1-ranked golfer in the world. A bad weekend at The Players, however, could cost him his ranking.

If #2 Phil Mickelson can win at The Players’ tournament this weekend and Woods finishes no better than fifth, Tiger’s long reign as the world’s best golfer will officially be over.

Tiger Woods had been ranked #1 for a record-setting 598 weeks. Next in the list is Greg Norman with 331 weeks.

Last weekend’s Quail Hollow Championship saw two notable events: Ireland’s Rory McIroy became the second-youngest winner of a PGA event (behind Tiger Woods) and Woods failed to make the cut for only the sixth time in his pro career, and only the third time since 2006.

On Thursday Wood shot a 2-over 74, six strokes off the lead. His drives went into the rough or into the water, and his putts didn’t go into the cup.

“I didn't hit the ball very good at all today. I had a two-way miss with everything today. Two balls in the water, and pretty much struggled all day. I just didn't have it today,” Woods told the Golf Channel, after the round.

Tiger didn’t have it on Friday, either.

In the second round, Woods shot a 79, the second-worst round of his professional career. His 43 on the back nine was his worst back-nine score. His two-day total of 153 was the worst he has ever shot.

After his performance at the Masters, where he finished tied for third, Tiger Woods lost the excuse of rust accumulated from his five-month layoff. However, his personal problems continue to brew, bringing constant media attention and a steady stream of rumors and ridicule.

Woods would not blame his personal problems for his poor performance.

"Every day I do media, I get asked it, so it doesn't go away," he said in a Golf Channel interview after the second round.

"Even when I'm at home paparazzi still follow us, helicopters still hover around. Does it test you? Yes, of course it does. Is that any excuse? No, because I'm out there and I have the same opportunity as everybody else here in this field to shoot a good number. And I didn't do it."

Whatever the cause may be, Tiger Woods, for so long known around the world as an unstoppable force on a golf course, has been slowed considerably.

If Tiger cannot find his old form for The Players tournament this weekend, his fall from grace will be reflected in the standings.