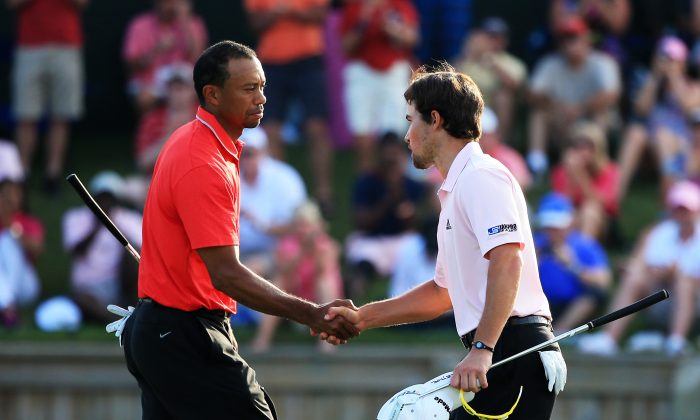 Tiger Woods of the USA shakes hands with Casey Wittenberg after finishing on the 18th green during the final round of THE PLAYERS Championship at THE PLAYERS Stadium course at TPC Sawgrass on May 12, 2013 in Ponte Vedra Beach, Florida. (Photo by Richard Heathcote/Getty Images)
Golf

Tiger Woods bad drop? A golf writer for CBS is saying a drop on No. 14 at the Players Championship was questionable.

Woods won his fourth PGA Tour Title in 2013 on May 12, after the tournament round in Florida.

Kyle Porter, a golf writer for CBS, says that because Woods determined where the ball should go after he hit into the water on the 14th hole, but he couldn’t have seen where it “crossed over the margin of the hazard.”

That meant he relied on the word of his playing partner, Casey Wittenberg, who saw that he told woods “exactly where I thought it crossed, and we all agreed.”

“There is no doubt,” Wittenberg added.

The PGA Tour said in a statement that if the point later proves to be wrong, the player is not penalized, “given the fact that a competitor would risk incurring a penalty every time he makes an honest judgment as to the point where his ball last crosses a water-hazard margin and that judgment subsequently proves incorrect.”