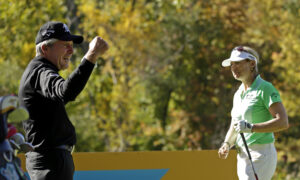 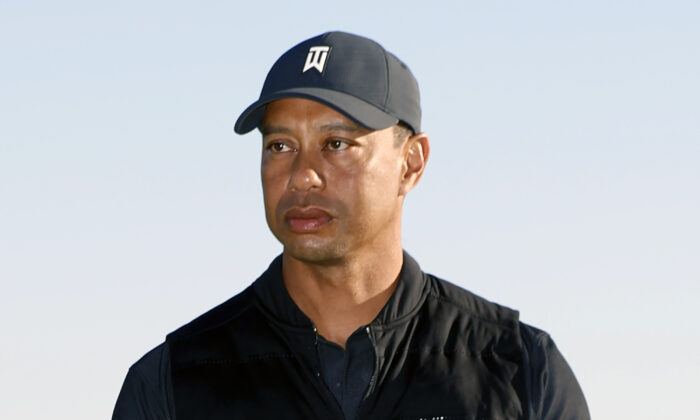 Tiger Woods looks on during the trophy ceremony on the practice green after the final round of the Genesis Invitational golf tournament at Riviera Country Club, in the Pacific Palisades area of Los Angeles, Calif., on Feb. 21, 2021. (Ryan Kang/AP Photo)
US News

Golfer Tiger Woods is “awake and responsive” after undergoing a “long surgical procedure” on his lower right leg and ankle, according to a statement released early Wednesday on his official Twitter account.

The 45-year-old, who was involved in a serious car accident in Los Angeles on Tuesday, was hospitalized with “significant orthopedic injuries to his right lower extremity,” Anish Mahajan, chief medical officer and interim CEO at Harbor-UCLA Medical Center, said in the statement.

He received emergency surgery, and is now recovering, according to the statement. It states that a rod was placed into the golf legend’s tibia to stabilize his fractures, and doctors used screws and pins to stabilize his foot and ankle injuries.

“Trauma to the muscle and soft tissue of the leg required surgical release of the covering of the muscles to relieve pressure due to swelling,” Mahajan said.

Woods, a father-of-two who was in Los Angeles over the weekend as the tournament host of the Genesis Invitational at the Riviera Country Club, was the sole occupant of his car when it crashed at about 7:12 a.m. near the suburban communities of Rolling Hills Estates and Rancho Palos Verdes.

His vehicle, a 2021 SUV, crossed a median and struck a curb before hitting a tree and swerving off the road and down an embankment, according to officials. Authorities said rescue teams had to use an ax to remove Woods from the vehicle wreckage.

“He is currently awake, responsive, and recovering in his hospital room,” the statement said. “Thank you to the wonderful doctors and hospital staff at Harbor UCLA Medical Center, the Los Angeles County Sheriff’s Department, and the Fire Department. Your support and assistance has been outstanding.”

“There are no further updates at this time and we continue to thank you for your well wishes and privacy for him and his family,” it said. “We thank everyone for the overwhelming support and messages during this tough time.”

There is no evidence to suggest that Woods was under the influence of any substances when his vehicle crashed, officials said during a press briefing.

Villanueva said that the accident “totally destroyed” the front end of the golfer’s car.

“Bumpers destroyed, airbags deployed—thankfully the interior was more or less intact, which gave him the cushion to survive what would otherwise have been a fatal crash,” he said.

The cause of the accident is currently under investigation, according to the sheriff.

“Get well soon, Tiger. You are a true champion!” Trump said via adviser Jason Miller.