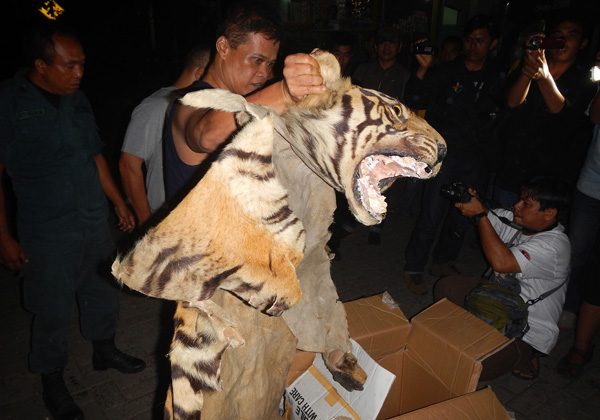 Two online merchants of tiger parts have been arrested in Indonesia. The bust was the result of a coordinated effort between local and national authorities, and the Wildlife Conservation Society (WCS) which supports ‘Wildlife Crimes Units’ operating throughout the country. The arrests are a small success in the battle to curtail the trafficking of wildlife parts online—where sellers can readily connect with a broad international customer base.

One individual was arrested in Bandar Lampung, the capital of Lampung Province located 90 km from Bukit Barisan Selatan National Park, critical habitat for the Sumatran tiger (Panthera tigris sumatrae). He allegedly sold tiger parts via social media networks, advertising their mystical and healing properties. The other was detained at the port of Merak on the western tip of Java, a critical shipping link between the two islands and a popular exit point for smuggled wildlife. His online offerings reportedly included a variety of ‘home decorations,’ including tiger skins as well as stuffed tigers, bears, and lions. The stuffed tigers listed for $5,000-7,000. According Indonesian law, the selling of protected wildlife parts holds a maximum penalty of 5 years in prison and a fine of $10,000. The items confiscated during the bust were limited to a whole tiger skin, two stuffed tiger paws, one stuffed tiger head, and a tiger claw. Although a relatively small bust, with less than 400 Sumatran tigers estimated to remain in the wild, closing these outlets and other like them are significant steps in protecting the remaining animals. “These recent arrests send a clear message to wildlife traffickers that Indonesia is serious about wildlife crime,” said Joe Walston the Vice President for Field Conservation at WCS. “We commend the West Java Natural Resources Conservation Agency (BKSDA) of the Ministry of Forestry and the Indonesian Police Lampung Office for working to save Indonesia’s wildlife heritage from illegal wildlife trafficking.”
Since 2003, WCS has helped the Indonesian Department of Forestry by providing data and technical advice to local law enforcement agencies during the investigation and prosecution of trafficking crimes. Their efforts have exposed traders of Javan gibbons, siamangs, and other primates, as well as birds, komodo dragons, and pangolins, among others. “Collaboration with Indonesian authorities is crucial in enforcement actions like these,” Walston said. Unlike illegal drugs, guns, child pornography, or similar offerings that are sold in the hidden, seedy underbelly of the “dark internet,” trade in tiger and other animal parts has traditionally occurred in the open. This is largely due to both a historic lack of enforcement as well as cultural attitudes of buyers and sellers who do not see this trade as a taboo or criminal act. However, a study published in the April 2014 edition of Traffic’s ‘Bulletin’ did find a decrease in the online sale of tiger parts since 2012—likely in response to growing awareness of the issue, as well as pledges by online retailers to crack down on the advertising and trade of illegal animal parts. A 2013 joint operation between 16 US states, three federal agencies, and three Asian countries—called “Operation Wild Web”—resulted in the arrest 150 individuals selling illegal wildlife and parts in the United States via internet marketplaces such as Craigslist and eBay. Further, last month, Traffic signed a Memorandum of Understanding with Alibaba Group (the largest online marketplace in the world, based in China) to, “co-operate on efforts to reduce illegal wildlife trade, pledging zero tolerance towards the listing and sales of illegal wildlife products online and working to jointly educate consumers,” according the announcement by Traffic. This MoU further solidifies a similar pledge Alibaba made in 2012 along with the 15 leading e-commerce sites operating in China. China is among the world’s most voracious consumers of endangered animals and their parts, often used in both classic and modern interpretations of Traditional Chinese Medicine.
This article was originally written and published by Loren Bell, a correspondent for news.mongabay.com. For the original article and more information, please click HERE.