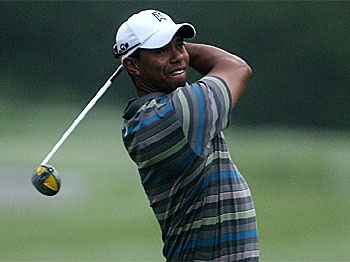 Tiger Woods hits a shot during a practice round prior to the start of The Players Championship held at TPC Sawgrass on May 5, 2010 in Ponte Vedra Beach, Florida. (Scott Halleran/Getty Images)
Golf

Tiger Set to Tee Off at Sawgrass for The Players Championship

By James Fish
Print
Tiger Woods will tee off at 1:28 p.m. to defend his fragile #1 PGA ranking at The Players golf tournament at TPC Sawgrass in Ponte Vedra Beach, Florida.

Tiger’s closest competitor, Phil Mickelson, just finished his first round, 2-under. If Mickelson wins and Woods finishes fifth or worse, he will end Tiger Woods 598-week reign at the top of the rankings.

Woods tied for third at the Masters, his first tournament after a five-month layoff which he used to try to resolve his marital problems.

Apparently those problems still weigh on his mind, as Woods failed to make the cut at Quail Hollow, only the sixth time in his pro career that he has failed to make it into the weekend.

Woods’ two-day total of 153 at Quail Hollow was the worst in his pro career.

#2-ranked Phil Mickelson won the Masters and finished second at Quail Hollow. If he continues playing that kind of golf, the world could see a new #1 crowned on Sunday evening

J.B. Holmes currently leads the field at the Players at Sawgrass, shooting 6-under. Ben Crane and Luke Donald are tied for second, 4-under.

Rory McIlroy, who won at Quail Hollow with a record-setting 62, 15-under for four rounds, also tees off at 1:28 p.m., but his group starts on the back nine while Tiger Woods starts on the front.