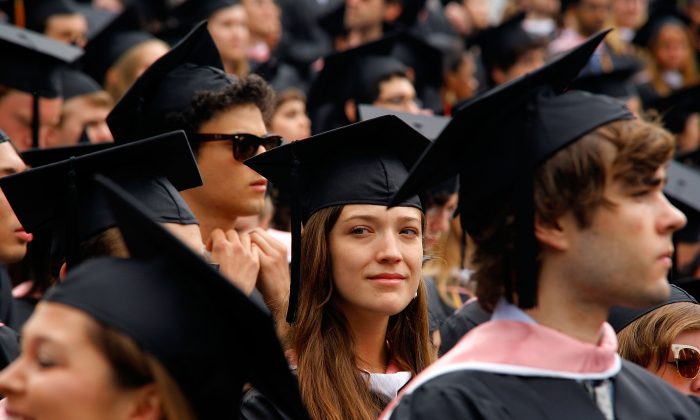 She was chic and attractive from her head to her toes. I admired her fine Chinese cheekbones, her simple skirt and blouse, her warm manner and her well-polished and logo-free leather purse. We twirled brown rock candy swizzle sticks in cappuccinos, decorated with artistic froth, at a table in Tianti bookstore in Midtown West.

Then she shocked me.

She said she forced her daughter to drop out of Vassar and transfer to a state school. That was after refusing to pay her tuition to try to prevent her from going there in the first place.

Vassar is one of the “Seven Sisters,” formerly all-women colleges on par with and affiliated with Ivy League schools.

And not only that, she forbade her to major in English!

Seeing my face, she said, “You think I am a tiger mom.”

My parents, Americans of English descent, put college choice and certainly choice of major like this: “Darling, we just want you to be happy.” Their only stricture was I had to finish in four years, had to work in the summers, and for graduate school I would be on my own. Done, no problem.

By the time I’d made my pitch for building autonomy in your children, I felt I was being the tiger mom to her, scolding her for a harsh parenting style.

I was also pitching the glory of the Ivy Leagues. If my daughter got into Vassar I’d be pleased.

But there is more reason to be skeptical of the idea of eight perfect, top of the heap, elite institutions that set you on your charmed path. It’s too narrow a path. It’s too much about the externals.

As the excellent William Deresiewicz wrote, “Don’t Send Your Kid to the Ivy League.” His reasoning was that students there become “excellent sheep,” aware of being the best, yet slavishly focused on performing the set tasks they are directed to do.

In an interview with The Atlantic, he said such students suffer from both grandiosity and depression. “It’s a false self-esteem. It’s not real self-possession, where you are measuring yourself against your own internal standards and having a sense that you’re working toward something.”

As my elegant companion explained her aversion to Vassar, I began to understand it. She feared her child would be brainwashed. She was offended by the coed dorms.

And you know, I am offended by them, too. Vassar was once a women’s college. Women’s colleges have a real track record of producing women who become leaders. Now, it’s not only coed in the classroom, it has them share dorms and bathrooms. She told me the students have only curtains to preserve their modesty in the showers. She said the college reasons that hotels are coed, so dorms might as well be, too.

Men are great. Some of my best friends are men. I’m for them.

Room of One’s Own

But for the developing, young, female, person, having a room of one’s own, a space to lead and explore without the potentially overbearing male energy, is a very good thing. Girls need a place to be girls.

Deresiewicz shares my admiration for Jane Austen. He wrote “A Jane Austen Education: How Six Novels Taught Me About Love, Friendship and the Things That Really Matter.”

One of Austen’s recurring themes is weak parenting. She always writes of mothers or fathers who do not look out for their children’s best interests. On a continuum, a Jane Austen parent would be the opposite end from a tiger mom.

So as our cappuccinos dwindled, so did my shock. As a Western-born person, I would not thwart my child’s college choice. Yet my Chinese-American friend intended to look out for her child’s present and future. I can understand that.