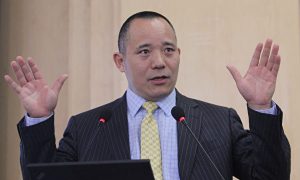 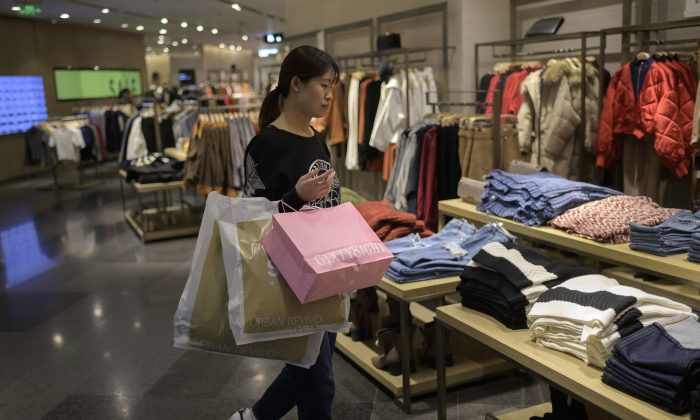 A customer shops for clothing at a mall in Beijing on Jan. 16, 2019. (Nicholas Asfouri/AFP/Getty Images)
China Business & Economy

“Only when the tide goes out do you discover who’s been swimming naked,” investor Warren Buffett once said. And it appears that the tide is ebbing quickly on the Chinese equities market.

China’s domestic stock market was among the best performing in the world thus far in 2019. But, on March 8, it logged its biggest drop in more than five months.

Chinese A-shares have rallied this year due to inflows of foreign money, an anticipated resolution to the ongoing trade war with the United States, and continued stimulus support from Beijing.

Astute investors know that China’s economic fundamentals are weak and getting weaker. Some had hoped the “greater fool theory” would sustain market appreciation a while longer, but a confluence of recent events has finally awakened investor skepticism.

Over the past few days, a perfect storm of negative data and worse-than-expected developments on the trade front has suddenly stopped the rally party.

Dollar-denominated imports also fell by 5.2 percent in February year-on-year. China’s trade surplus with the United States—one of the focal points in the ongoing trade discussions—fell sharply. China’s export-dependent economy is clearly struggling without a trade accord.

Economic uncertainty also is increasing within the highest levels of the Chinese communist regime’s leadership.

Premier Li Keqiang delivered his annual government work report last week during the opening session of the regime’s rubber-stamp legislature, the National People’s Congress. Li’s outlook was grim, citing “graver and more complex” risks to the country’s economy and predictions of having to fight “tough economic battles” ahead.

Part of the messaging was around the 2019 state-dictated GDP forecast, which Beijing forecast at a range of 6.0 to 6.5 percent to give itself breathing room given heightened uncertainty in 2019. Last year’s government-stated growth was 6.5 percent.

It was important psychologically for Beijing to include the 6.5 percent figure, as the lower edge of that range (6.0 percent) would result in China’s slowest GDP growth in three decades.

Beijing was prepared to trade a balanced budget for growth just to get to the lower side of that range. In addition to GDP guidance, Li also revealed previously expected tax cuts to reduce burden on manufacturers. Value-added tax (VAT) for manufacturers was cut by 3 percentage points to 13 percent, while the VAT rate for construction and transportation companies was cut by 1 percentage point to 9 percent to spur economic activity. Other incentives announced include reducing highway tolls, utility prices in certain jurisdictions, and lowering requirements for employer pensions.

The March 7 report titled “A Forensic Examination of China’s National Accounts” suggests that China’s total economy is more than 12 percent smaller than what official data presents. “Since local governments are rewarded for meeting growth and investment targets, they have an incentive to skew local statistics,” the authors state, corroborating a long-held belief that China’s method of GDP compilation is susceptible to both intentional and unintentional falsification.

The report also suggests that the recent reduction of economic growth is worse than officials publicly acknowledged. It’s nothing groundbreaking, but the think-tank research reaffirmed to global investors that positive data out of Beijing should be discounted while negative data should be further penalized.

Investors in Chinese equities were also spooked by news that a summit between U.S. President Donald Trump and Chinese leader Xi Jinping at Trump’s Mar-a-Lago resort in Florida at the end of the month has been removed from the agenda.

The meeting was always tentative in the eyes of astute China watchers. The trade war was never close to resolution, despite public statements of progress made by both sides, largely to assuage the financial markets.

U.S. Ambassador to China Terry Branstad confirmed March 8 that no date has been set for the summit, but the two sides are still negotiating. By most accounts, the United States and China still aren’t close to an agreement. Significant hurdles around forced technology transfer and corporate espionage, specifically about how to ensure that Chinese authorities enforce rules and hold companies accountable, remain. These items shouldn’t be compromised if the Trump administration is serious about correcting decades of wrongdoing by Beijing on international trade.

Trump demonstrated in Vietnam—at the summit with North Korea—that he is not afraid of walking away from a bad deal. It served as a warning to Beijing leadership that certain trade provisions shouldn’t be compromised.

Consequences of a full-blown trade war are heavier than the absence of a North Korea pact, but it’s nevertheless a shrewd move by Trump. Without trade war relief, it will be near impossible to achieve China’s 2019 GDP targets.

Selling pressure on Chinese stocks was further augmented by a few rare “sell” ratings issued by Chinese domestic brokerage firms, suggesting that stock valuations of onshore stocks may be reaching uncomfortable levels even for domestic brokers.

The People’s Insurance Co. was downgraded to a “sell” rating on March 7 by Citic Securities, which believes the company is overvalued after more than doubling this year. The next day, China Securities Co. also received a “sell” rating issued by brokerage Huatai Securities. Shares of both financial firms were down more than 10 percent on the day they received “sell” ratings.

Despite an economic slowdown, China stocks have rallied on news of the MSCI index increasing China exposure in its emerging-market indices and a possible resolution to the trade war. But those now look more like “sell the news” events.