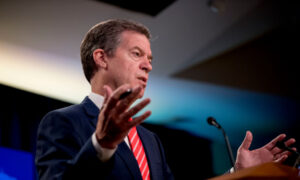 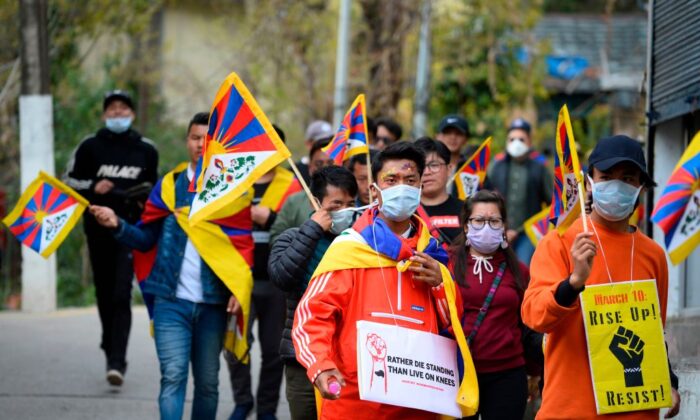 Tibetans living in exile take part in a protest march from McLeod Ganj to Dharamshala to mark the 61st anniversary of the Tibetan Uprising Day that commemorates the 1959 Tibetan uprising, in McLeod Ganj, India on March 10, 2020. (Sajjad Hussain/AFP via Getty Images)
China-US News

Tibetan groups outside of China welcomed the passage of a new bill by Congress and called on other countries to follow U.S. leadership in supporting Tibetans currently being persecuted by the Chinese regime.

The Tibetan Policy and Support Act was passed on Dec. 21 as a part of the 2021 omnibus spending bill, which would set aside $1.4 trillion in spending for government agencies and $900 billion in COVID-19 aid.

The legislation, which updates the Tibetan Policy Act of 2002, would authorize the use of sanctions under the U.S. Global Magnitsky Human Rights Accountability Act to punish Chinese officials who “directly interfere with the identification and installation of the future 15th Dalai Lama,” according to the language of the bill.

The Dalai Lama is the title given to the spiritual leader of the Tibetan people. The current leader, the 14th Dalai Lama, went into exile in India after a failed uprising against Chinese communist rule in 1959. The Chinese regime perceives the exiled Dalai Lama as a “separatist.”

The Chinese Communist Party (CCP) invaded the region of Tibet in 1949. Beijing has since deployed mass surveillance in Tibet, suppressed people’s expression of Tibetan Buddhist faith, and subjected Tibetans to forced labor at military-style training centers.

The new bill stipulates that U.S. policy will recognize that the selection of Tibetan Buddhist religious leaders, including a future 15th Dalai Lama, are “exclusively spiritual matters” for the Tibetan Buddhist community.

In 2007, the Chinese regime enacted regulations that allowed it control over the process by which lineages of Tibetan lamas are reincarnated.

The Secretary of State would also urge Nepal to continue to provide Tibetans safe passage from China to India, where the government-in-exile resides.

According to United Nations data, Nepal was home to about 10,800 Tibetan refugees as of the end of 2019. There have been cases of Nepalese border police arresting Tibetans and then deporting them back to China.

The legislation would also allocate funds for programs to support Tibetan communities, such as providing humanitarian assistance for Tibetan refugees in South Asia.

“Passage of the Tibetan Policy and Support Act sends an important message that the United States stands with the Tibetan people and against any effort by the Chinese Communist Party to interfere with the religious process of identifying Tibetan Buddhist leaders, such as the Dalai Lama,” said Sen. Marco Rubio (R-Fla.) in a Dec. 2 statement.

Rubio was among a group of bipartisan senators that introduced the Senate version of the bill (S.3529) in September 2019. In the same month, Rep. Jim McGovern (D-Mass.) introduced the legislation in the House (H.R.4331). The House bill was passed by the House of Representatives in January this year.

McGovern stated: “The legislation reaffirms America’s commitment to the idea that human rights matter, that we care about those who are oppressed, and we stand with those who are struggling for freedom.”

Students for a Free Tibet (SFT), a global grassroots network headquartered in New York, said it was grateful that the bill was included in the spending bill.

“While there is much more work to be done to free Tibet, this is an excellent victory and a step in the right direction,” stated Pema Doma, SFT’s campaign director, in a statement.

Doma added: “I hope that other world leaders can use TPSA as an example of how to incorporate human rights principles and religious freedom into foreign policy.”

Washington-based nonprofit International Campaign for Tibet, in a statement, applauded Congress for “its bold leadership and look forward to other countries adopting their own versions of this legislation.”

China’s foreign ministry spokesperson Wang Wenbin, in a daily briefing on Tuesday, called on the United States to stop “meddling” in its “domestic affairs,” when asked about the Tibet bill.

Pema Jungney, speaker of the Tibetan government-in-exile, formally known as the Tibetan Central Administration, said the legislation was a “historic and a momentous achievement to the Tibetans all over the world,” in a Dec. 23 statement.

“We Tibetans are deeply indebted to the government and people of the United States of America for their unwavering support and kindness extended until now,” Jungney added.

Jungney said the exile government would like to “appeal other countries to adopt such kind of legislation in their respective parliaments.”