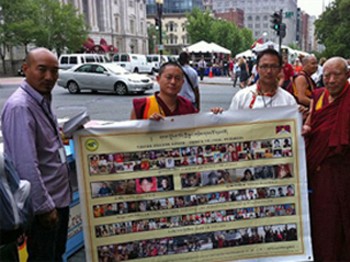 Thirteen Tibetans, several of them young, have been sentenced to prison in Sichuan’s Garzê Tibetan Autonomous Prefecture, west of Chongqing. Their crime: attempting to publicly celebrate the exiled Dalai Lama’s 76th birthday.

The Voice of Tibet reports that two of the Tibetans received three-year prison terms from the Intermediate People’s Court. The two are 19-year-olds and had been beaten by Chinese police after their peaceful protest on June 24.

China’s ruling Party regards the birthday as a “sensitive” date and imposed restrictions on public gatherings in Lhasa, Tibet’s capital. Highlighting the significance, a Communist Party prefecture-level secretary said, “There is a need to resolutely crack down on separatist activities.”

The Tibetan demonstrations seek the return of the Dalai Lama, religious freedom, and Tibetan autonomy. Many Tibetans assert that China is waging a “cultural genocide” against them.

Chinese police have also harassed and detained religious pilgrims and monks who came to the region from India. Several dozen are being interrogated in Garzê’s detention center.

When Free Asia Radio called the Garzê court and asked if 13 Tibetans are being prosecuted, an official responded, “I don’t know.” When the reporter continued to investigate, a higher-level department with the court responded that no staff report had yet been received.

The Dalai Lama’s birthday is of importance not only to Tibetans: A resolution by the U.S. House of Representatives was passed on July 6, lauding his efforts which encourage those “who are denied their basic human rights within the People’s Republic of China.”