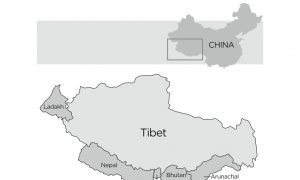 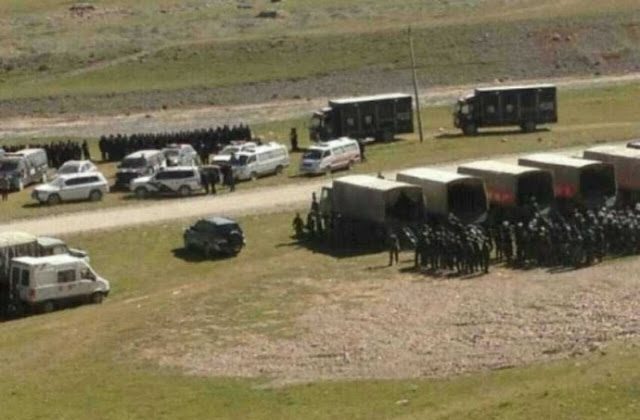 Thousands of Tibetans, who rallied to protect the environment in Zaduo County, Yushu Autonomous region of Qinghai Province on Aug. 16, 2013, were suppressed by hundreds of armed police using tear-gas bombs and electric batons. More than 100 Tibetans were believed to be injured. (Photos provided by Voice of Tibet)
China

More than 100 Tibetans were injured in a violent crackdown last week by armed Chinese security forces in Zaduo County, Yushu Autonomous region of Qinghai Province, as they peacefully protested against large-scale mining activities in the area, according to Tibetans outside Tibet who are in touch with those in the affected areas.

As mine workers assembled for work in Aduo, Zhaqing, and Sahuteng townships on Aug 14, more than one thousand Tibetans gathered in each township to protest..

Many of the Tibetans held up banners and shouted slogans such as “stop the destruction of the environment.” Security police beat them with electric batons and sprayed the crowds with tear gas. Some protesters were arrested.

In a phone interview with the Epoch Times, Gongjuedunzhu, a Tibetan originally from Zaduo County and now exiled in India, said: “A lot of soldiers arrived on the evening of Aug. 15. They were joined by an additional 500 police and military personnel, who came in 60 trucks. Fifteen of the trucks went to Aduo Township and 45 went to Zhaqing Township. There were about 1200, 1000, and 1500 Tibetan protestors in Aduo, Zhaqing, and Suhuteng, respectively.

“At about six pm. the police and military started firing tear gas to dispel the crowd. Many protestors were knocked unconscious and as soon as they regained consciousness and stood up, they were beaten with electric batons.

“The police and the military also destroyed many cars and motorcycles owned by the Tibetans. A lot of people were injured but no detailed statistics are available as the area is still under the authorities’ tight control. However, we know 14 people in Zhaqing were hospitalized. On the evening of Aug. 16, similar suppression also occurred in Aduo.”

At present, Zaduo is tightly guarded by police and military personnel. The Tibetans are not allowed to travel and have had their mobile phones confiscated.

Suonan, a Tibetan exiled in Switzerland, told the Voice of Tibet that the Chinese communist regime had dispatched a large group of police and military personnel to brutally suppress the protesting Tibetans at Aduo, using rifles, tear gas, and high-voltage electric batons.

Gesangjian, another exiled Tibetan in India, told the Voice of Tibet, “It is the customs and beliefs of Tibetan Buddhism not to damage the natural environment. Facing the large-scale excavation as planned by the local authorities, Tibetans would surely fight against the destructive mining.”

At the time of this report, all the affected areas were being tightly monitored by the Chinese authorities.

Translated by Leo Chen. Written in English by Christine Ford