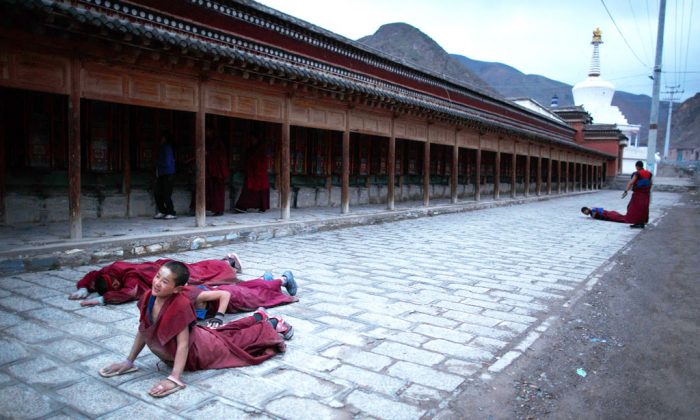 A young monk (L) prostrates near the Labrang monastery in Xiahe, Gansu province, a flashpoint for many Tibetan protests against Chinese authorities on May 16, 2013. More than 13o Tibetans have set themselves alight since 2009, with most dying of their injuries, in demonstrations against what they view as Chinese oppression. Beijing rejects such claims, pointing to substantial investment in Tibet and other regions with large Tibetan populations, although critics say economic development has brought an influx of ethnic Han Chinese and eroded traditional Tibetan culture. (Ed Jones/AFP/Getty Images)
China

Several dozen Tibetan nuns were expelled from their temple for refusing to participate in state-mandated “patriotic education.”

The nunnery, located in the town of Nagqu in Tibet’s Biru County, expelled at least 26 nuns for neither registering with a local government body nor attending “patriotic education” classes, Voice of America reported on Nov. 17. According to unnamed sources, the “patriotic education” was instituted on a large scale this September as part of moves by the Chinese regime to get a tighter grip on its western territories.

Tibet, a Chinese province since the People’s Liberation Army conquered it in the 1950s, has seen severe damage to its traditional culture and religion under communist rule. During the Cultural Revolution (1966-1976), the majority of Tibet’s temples and monasteries were destroyed or closed.

Today, Tibetan Buddhism is under strict regulation by the Chinese Communist Party (CCP), and the exiled Dalai Lama, spiritual leader of Tibet, is considered by the Chinese authorities to be a “splittist element.”

In recent years, the CCP has taken numerous measures to clamp down on the rights of TIbetans. As previously reported by Epoch Times, two popular Tibetan singers from Biru County and several writers were detained last year for expressing “splittism.”

In March 2008, following mounting political and socioeconomic conflicts, protests broke out in Lhasa, Tibet’s capital, as well as in the provinces of Qinghai, Gansu, and Sichuan, where Tibetan minority communities can be found. The protests were severely repressed by Chinese police and military forces; the Tibetan government-in-exile reported that about a hundred people were killed.

The expelled nuns were sent back to their hometowns. Some went into hiding in the mountains to escape inspection, the Voice of America report said.

Since February 2009, at least 133 Tibetans have self-immolated in Tibet and China in response to repression by Chinese authorities, according to the International Campaign for Tibet.