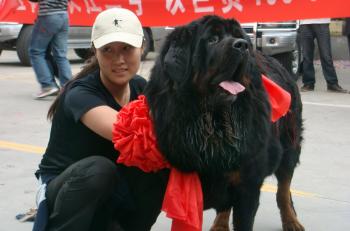 A Tibetan Mastiff was sold for $600,000 to a wealthy Chinese woman identified by the surname Wang. Mrs. Wang poses with her new dog at the Xi'an airport. (STR/AFP/Getty Images)
China

Resa Xu
View profile
Follow
biggersmaller
Print
The Tibetan Mastiff, a dog that can reach 190 pounds, is becoming quite pricey on the Chinese market.

Earlier in 2009, a Tibetan Mastiff named Yangtze River Number Two was sold to a Chinese millionaire for $600,000. The 31-inch-tall Tibetan Mastiff, weighing nearly 150 pounds, might have become the world's most expensive dog.

The young millionaire, Mrs. Wang, immediately fell in love with and bought the Tibetan Mastiff while visiting Qinghai province. After arriving back home with the dog at Xi'an, Shaanxi, she was picked up by a convoy of 30 black Mercedes Benz cars at the airport, according to Xi'an Evening News.

The breed is believed to bring good luck to the owner in Chinese culture. They are immensely popular among wealthy Chinese families to the point that the fetching price is increasing 500 percent per year, according to MSNBC.