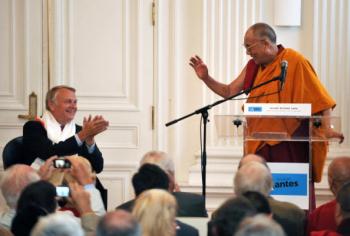 The Dalai Lama, in Paris last week, expressed concern about Tibet in the aftermath of the Olympics. (Frank Perry/AFP/Getty Images)
World

Shar Adams
View profile
Follow
biggersmaller
Print
Tibet’s government in exile is preparing to lay down a detailed program for autonomy in the disputed region when it resumes talks with Chinese authorities in October.

Chinese authorities and envoys of the Central Tibetan Administration met for the seventh round of talks in June this year – a move largely seen to appease international criticism of China’s handling of Tibet during the outbreak of unrest earlier in March.

Spokesman for the Australia Tibet Council, Dr Simon Bradshaw, said despite high hopes of successful negotiations at the earlier meeting, the talks had concluded “without concrete progress”.

“At the meeting in October I understand they will be tabling a detailed program for autonomy for Tibet to try and progress the negotiations,” he told The Epoch Times.

Dr Bradshaw said despite continuing international pressure to accommodate Tibetan interests, Chinese authorities had recently made a string of provocative statements about the region, including the opening of new railway lines in Tibet, exploring of mineral deposits and relocating nomads.

“It really makes clear that it [the Chinese Communist Party] intends to be in Tibet for the long term, and it is intending to continue and intensify and consolidate its control over the region,” he said.

Professor Samdhong Rinpoche, the Prime Minister of the Central Tibetan Administration, said in a statement that his administration is fearful of the future for Tibet and sees the post-Olympic period as being “more dangerous than the present”.

The Dalai Lama, in meetings with French parliamentarians in Paris last week, was reported to have also expressed concern about Tibet in the after math of the Olympics.

"He said that there was a risk … that immediately after the Games a million Chinese will settle in Tibet to further dilute the Tibetan population," said Jean-Louis Bianco, a spokesman for the Tibetan spiritual leader who was at the meetings, reported Reuters.

Mr Bianco also said that the Dalai Lama has detailed knowledge of arrests, torture, summary executions and a reinforcement of the Chinese military presence through new barracks.

This week reports emerged of renewed violence, with the Dalai Lama saying that 140 Tibetans had been killed. The reports have since been identified as incorrect.

Dr Bradshaw said the Tibet administration was still endeavouring to independently verify reports of killings in the eastern Kardze Tibetan Autonomous region, but they were sincerely hoping that they were not true.

Tibet is still reeling from the outbreak of unrest that occurred in March this year. The Tibetan Administration has identified 203 deaths and round 1000 injured, but official Chinese reports continue to list just one Tibetan “insurgent” killed.

As a result, over 5000 Tibetans have also been arrested, while military and police presence remains heavy.

Dr Bradshaw said the eastern region of Tibet had been particularly active in the March unrest and while the extent of the trouble was still unclear they had confirmed that there were shootings.

“We have seen a lot of renewed patriotic education in that area, the purging of many of the monasteries and increasing of police presence,” he said.

Dr Bradshaw said the crackdown on the monks had been particularly hard, with reports they had been removed from monasteries and forced to verbally denounce the Dalia Lama, write self critical letters and sign documents of the regime’s version of events.

With further efforts to quash dissent during the Olympics, these tactics had now broadened to include lay Tibetans, farmers, nomads and even government workers.

“There is every sign that China wants to intensify the policies that lead to the unrest in March rather than work constructively with the Dalai Lama’s representatives towards a solution,” Dr Bradshaw said.