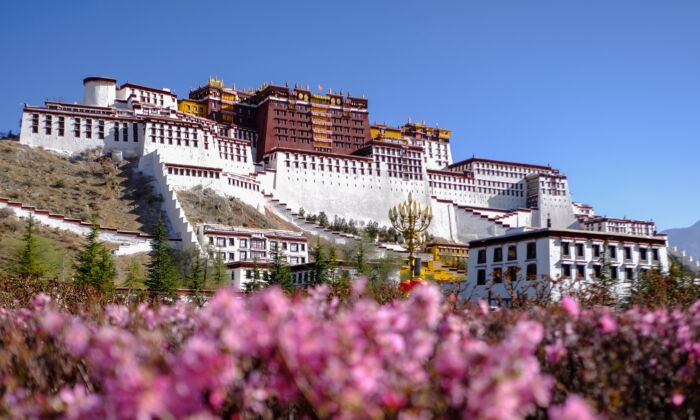 The front of the Potala Palace in Lhasa, Tibet, on March 31, 2022. (VCG/VCG via Getty Images)
China Business & Economy

The Chinese regime announced on Aug. 8 the first COVID-19 outbreak in Tibet since 2020. Authorities closed off part of the Tibetan capital Lhasa and mass-tested residents in three cities on Aug. 9 to contain the spread of the virus.

The virus was identified as the Omicron BA.2.76 variant. Chinese authorities claimed Mount Everest tourists brought the virus to the region.

Worried that authorities might lock down more cities, residents told The Epoch Times on Aug. 9 that many people are trying to leave Lhasa, causing heavy traffic and rising airfares.

“It costs over 8,000 yuan [about $1,200] to buy a flight from Lhasa to Chengdu [almost a two-hour flight],” A Lhasa resident said in a phone interview on Tuesday.

Another round of a COVID outbreak has hit Xinjiang, a region home to Uyghur and Muslim minorities, since July 30. The outbreak has expanded to 12 cities, and authorities claimed that tourists brought over the Omicron BA.5.2 variant.

The Potala Palace, Norbulingka, Tibet Museum, and other tourist attractions in Lhasa were closed on Aug. 9. Additionally, all other non-essential businesses and establishments had to stop operating that day. Local authorities ordered residents and tourists to get tested for COVID.

The majority of Tibetans practice Tibetan Buddhism. The city’s Buddhist Association decided to close all places of worship and suspend all religious activities on Aug. 8.

Authorities implemented similar measures in Shigatse, the second-largest city in Tibet, located 170 miles south of Lhasa and Ngari, and where tourists can see the north face of Mount Everest. Authorities declared a connection between the COVID infections in Lhasa, Shigatse, and Ngari.

The outbreak was first reported on Aug. 7 when a three-year-old girl visited a hospital in Lhasa with a fever and a sore throat. She tested positive for COVID.

Then her 32-year-old mother, 53-year-old grandmother, and 15 other relatives who live in the same household were also diagnosed with COVID on the same day.

According to the authorities, the girl and her mother live in Lhasa, while the grandmother lives in Shigatse. The three individuals and five family members took a train from Shigatse to Lhasa on Aug. 4. Two others in Shigatse boarded a train bound for Lhasa on Aug. 5. They all went to Lhasa for a relative’s funeral.

Chinese authorities claimed that some tourists who visited Mount Everest had brought the virus to Ngari, then transmitted it to neighboring Shigatse before the family spread it to Lhasa.

With 3.6 million people living on over 474,000 square miles, Tibet has one of the lowest population densities in the world, comparable to Montana in the United States.

There are no reports on how authorities carry out COVID tests on the Tibetan nomads.

Xinjiang authorities announced more COVID infections on Aug. 9 and sealed off more areas in the cities of Urumqi, Turpan, Aksu, and Shihezi.

Between July 30—when the authorities initially reported the outbreak in the region—and Aug. 7, there were 8.82 million tourists, with an average of 980,000 visitors each day, according to official data.

Tourists can leave a locked-down city if they have two negative COVID tests within 48 hours and have never been to high-risk areas.

“The entire city of Ili is under lockdown. Nobody can enter. Businesses are closed. We are locked at home,” a Xinjiang resident told The Epoch Times on Aug. 9. “The environment is tense. We feel anxious.”

A traveler told The Epoch Times that she and several other tourists didn’t leave Ili before the authorities locked down the city.