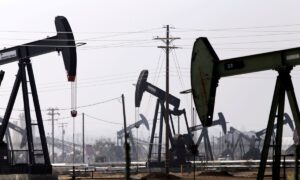 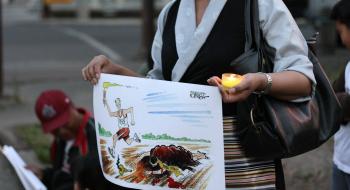 RIGHTS TRAMPLED: Tibet supporter holds a commentary cartoon on the Beijing Olympics during a candlelight vigil at the Chinese Consulate in Calgary on August 7. (Neil Campbell/The Epoch Times)
Canada

Consulate takes down Chinese flag and photographs participants from windows

CALGARY—Moderate temperatures and blue skies served as the backdrop to a candlelight vigil held by various Tibet support groups at the Chinese Consulate in Calgary Thursday evening.

The vigil, which drew more than 100 supporters, was organized by members of the Tibetan Community of Alberta, Students for a Free Tibet and the Canada Tibet Committee.

Event organizer Kephun Chazotsang said that while the Olympics are a good opportunity to bring the Chinese regime’s human rights abuses to the forefront, it’s important that rights are not dropped from focus when the Games have concluded.

“There are some major human rights issues in China. Let’s not forget about them — this is the perfect time to bring attention to them. These issues will still be there two weeks from now when the Olympics are over and they will be there for years to come unless we, as a group of free people, are able to put pressure on both the Chinese government and our own politicians to bring about change, change for the better.”

Chazotsang also said that the spirit of the Olympics has been compromised by awarding the Games to a totalitarian regime such as China.

“When you think about the Olympics, it’s about brotherhood and free and honest competition between nations. And when you consider that spirit, having the Chinese host the Olympic Games turns out to be a bit of an irony.”

During the event the Chinese flag, which had been hanging outside the consulate, was removed. Consulate staff also filmed and photographed organizers of the vigil through a window, and several were seen watching the event from the roof at various times throughout the evening.

Chazotsang said evidence showing the CCP staged the Lhasa “riots” that led to the Tibetan crackdown earlier this year is something to be expected from China’s communist regime.

“That’s some of the things you’ll find as you peel back the layers of the onion that is the Chinese government. They are not above propaganda and they are not above staging their own political theatre. If you want to look at conspiracy theories, take a look at China and it’s packed full of them. That’s part and parcel of what you get when dealing with the Chinese government.”