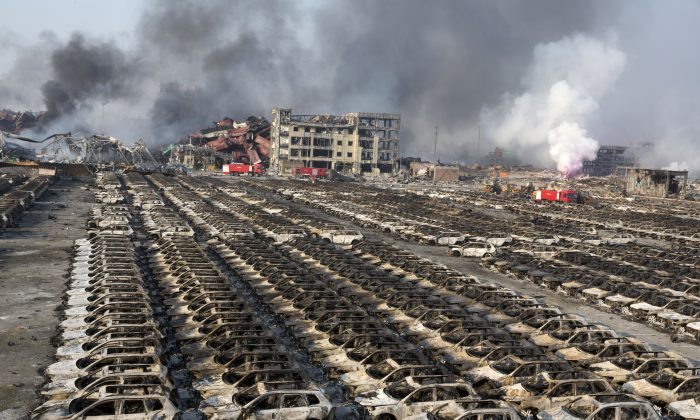 Smoke billows from the site of an explosion that reduced a parking lot filled with new cars to charred remains at a warehouse in northeastern China's Tianjin municipality on Aug. 13, 2015. (AP Photo/Ng Han Guan)
China

The announcement on the Tianjin city government’s microblog said there was no hope of finding the eight people, and the court will now start issuing death certificates.

“After thorough investigations by all parties, it is certain that there is no possibility of survivors,” said the statement, posted late Friday night.

The eight include five firefighters, underscoring the explosion’s status as the worst ever disaster for Chinese first responders, more than 100 of whom were killed, including police officers. Among firefighters, a total of 104 were killed.

Investigations into the Aug. 12 blasts at the Ruihai International Logistics warehouses showed they were located closer to homes than permitted, and stored much more hazardous material than authorized, including 700 tons of highly toxic sodium cyanide.

A series of massive explosions late at night shattered windows and tore facades off buildings for miles around, while launching debris including heavy steel storage canisters into nearby communities with the force of an artillery shell. Disgruntled homeowners have held numerous angry protests demanding the government buy back their apartments, saying they are unlivable.

The disaster has raised questions about corruption and government efficiency, potentially tarnishing the communist government led by Chinese leader Xi Jinping, who has made those two issues a hallmark of his administration.

Authorities are investigating malfeasance in the issuing of permits and regulation of the company, and have detained 12 of its employees and executives. They include the primary owner, who was on the board of a state-owned company and kept his ownership of Ruihai hidden as a silent partner.

Also detained as part of the investigation are 11 government officials, while the head of the government body in charge of industrial safety, Yang Dongliang, has been placed under investigation for corruption.

Yang had previously worked for 18 years in Tianjin in state industry and local government, rising to executive vice mayor.

Authorities say they have sealed all waterways leading out of the blast zone to curb cyanide contamination as teams in hazmat suits clean up hazardous debris.

According to the Tianjin Environmental Protection Bureau, water samples inside the disaster zone have shown levels of cyanide as high as 20 times above that considered safe. No cyanide has been detected in nearby seawater or areas outside the 3-kilometer (1.8-mile ) radius quarantine zone.