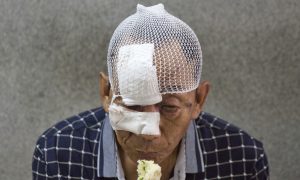 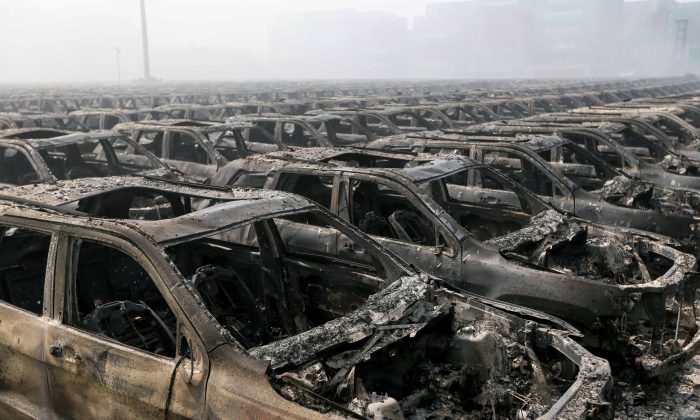 Brand new cars parked in Tianjin port are seen badly damaged at the site of the massive explosions in Tianjin on Aug. 13, 2015. (STR/AFP/Getty Images)
Opinion

The explosions rocking China recently may signal a turning point for the Chinese regime.

As this article is being written, a huge blast tore through a chemical plant in Dongying City in China, a little over two weeks after a series of blasts in a chemical plant in Tianjin killed 145, according to the official death toll. Ten days after the Tianjin explosion, there was another one in Zibo City.

The Tianjin blast has been a hot topic in the news in China for 20 days. Although 23 suspects who are allegedly responsible for the explosion have been arrested, the real cause, and who or what is behind this, are likely to remain a mystery for now.

What is clear is that everything went wrong. There are many links in the chain that led to the Aug. 13 blast, and if any single link had remained intact, the disaster could have been prevented.

Ruihai International is one of only three companies in Tianjin with the licenses needed to store hazardous chemicals. A private company, it got all the necessary documents approved by the dozen different state offices involved in just one and one-half years, even though it had already violated many regulations. For instance, Ruihai operated for more than half a year without a license to handle hazardous materials. The agencies charged with inspecting the company turned a blind eye.

An air of conspiracy surrounds the Tianjin blast.

The firefighters responding to the fire at Ruihai didn’t know there were 3,000 tons of explosives and flammable chemicals that would detonate if doused with water.

There are thousands of similar hazardous chemical factories and warehouses in China close to residential areas. How many operate with only one or two links in the chain of causation intact? The Tianjin and Zibo explosions happened shortly after safety inspections. There is no reason to be optimistic.

An air of conspiracy surrounds the Tianjin blast. For the first several days after the explosion, some of the peripheral mouthpiece media outlets started to dig into the background of Ruihai International and to unearth possible connections to current or previous members of the Politburo Standing Committee (the most powerful Communist Party body).

However, when the main mouthpiece took over the investigation, the “tigers” (high-ranking Party officials) quickly turned to flies (low-ranking Party officials). According to Xinhua News Agency, the state-level mouthpiece, one of the real owners of Ruihai is the son of a former district police chief in Tianjin, while another one is a high-ranking manager of a state-owned enterprise.

This silence is one of the strongest indications that the Party has lost the trust and credit of the people of China.

Compared with the members of the gang of former security czar Zhou Yongkang, not to mention Zhou himself, those two can only be considered flies.

Since Xinhua News Agency’s results are the final conclusion, there is no way that anybody could investigate further without risking being arrested or even prosecuted for “spreading rumors.”

If Xinhua is correct, that hardly makes the situation any better. In China, there are only about a dozen “big tigers” like Zhou Yongkang, while the tigers number in the hundreds. However, the flies could easily be in the millions. Everyone could manipulate or bypass the laws and regulations and put other people’s lives in danger.

End of the China Model

Wang Sixiang, a famous blogger from Chengdu, China, claimed that the Tianjing explosion had killed the Wenchuan model—named after the devastating Wenchuan earthquake in Sichuan Province in 2008. Wang defines the Wenchuan model as “blessing and praising, and forcing donations.” It successfully transformed the worst of natural and man-made disasters into the self-promotion and praise of the Chinese Communist Party (CCP).

Those who were responsible for the students’ deaths caused by the collapse of shoddily constructed schools have never been brought to justice. Instead, the individuals who tried to find the evidence of corruption behind the collapsed schools were put in jail.

Only seven years later, has the blessing and praising almost disappeared from any traditional and social media except for the mouthpieces directly run by the CCP. This silence is one of the strongest indications that the Party has lost the trust and credit of the people of China.

Keeping the economy growing is a bargain meant to gain the people accepting the CCP’s rule.

In addition to the demise of the Wenchuan model, the China Model—the idea that China provided a path for development independent of Western market-focused policies—is also in trouble. The China Model has for some time been a form of flattery, and some saw China as the savior of the world economy. The official definition of China Model is unclear. It can be described as, while rejecting any political reform, attracting foreign investment to pursue economic development under one-party rule. The economy was mostly driven by export and investment (mostly basic infrastructure), not domestic consumption.

A friend told me a story. He once helped to export fossil fuel power plants to China. During a meeting with provincial officials, the American exporter side mentioned the package for handling air and water pollution. The provincial official rejected the offer and said, “We don’t care about the pollution, why do you care?”

Most people can easily accept that the Tianjin blast resulted from too rapid development. But actually, ignoring safety, as well as human rights violations, destruction of the environment and natural resources, were intentionally designed to reduce the costs of making China the world’s factory.

Why must the planners keep growth at an increase of more than 8 percent? Keeping the economy growing is a bargain meant to gain the people accepting the CCP’s rule. In other words, economic growth is a proxy for the CCP’s legitimacy. That’s the real story behind the explosion in Tianjin.

It is obvious that the anti-corruption campaign couldn’t prevent the blast. Moreover, it shouldn’t have. The campaign was not designed to solve such problems.

The anti-corruption campaign works from the top down. It’s easy to reach the officials at the ministry and provincial levels. However, there is very little chance that the Central Commission for Discipline Inspection will pick as targets the lower level officials. Moreover, the provincial and lower level governments and Party committees don’t have the drive to carry out their own anti-corruption campaigns.

Millions watched almost live broadcasting of the blast and realized how vulnerable their bourgeoisie lives are.

Ruihai International was established in December 2012, and most of its licenses and permits were approved during the anti-corruption campaign, most likely illegally. Besides, corruption was the designed lubricant for China’s economic development from the beginning, with selective anti-corruption added, became the personal tool enhancing the power of former Party head Jiang Zemin.

While the Tianjin blast may seem to be like any other man-made disaster that has happened in China in the past several years, it does have its own significance.

It happened in Tianjin, one of four municipalities directly under the control of Party Central, and part of a planned megalopolis including Beijing, Tianjin, and Hebei Province. If Beijing is the heart of China, Tianjin is the aorta. It is supposedly the best managed area.

The explosion happened in one of the most populated residential areas. In China, only the most powerful families and interest groups can avoid being victims of Tianjin-like disasters. The largest number of beneficiaries of economic development and supporters of the CCP’s policies are those being called “middle class”—the same people as those who lived in three residential quarters within 1,000 yards of the blast center.

Millions watched almost live broadcasting of the blast and realized how vulnerable their bourgeoisie lives are. People realized that this could happen to anyone. If Tianjin is not safe, nowhere is.

The Tianjin blast is not only the end of China Model. The CCP has always had a supplement to give it the legitimacy it lacked. Mao used the concept of “continuing revolution.” Deng Xiaoping used “development is the absolute principle.” Until recently, economic development had been the only alternative for securing the CCP’s legitimacy.

The Tianjin blast declared the death of the alternative. With the slowing down, or most likely the recession, of China’s economy, and the blasts triggered by the accumulated problems from the past 30 years, the CCP is in urgent need of another alternative. The available options are very limited. Nationalism could be one but it’s a not-so-effective double-edged sword. It could do more harm than good to the CCP. It’s a dead end.