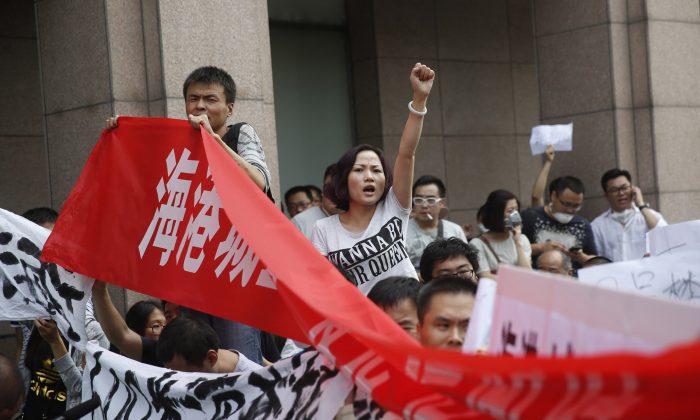 Chinese residents protest outside the hotel where authorities held a press conference in Tianjin, after a massive chemical explosion there, on Aug. 17, 2015. (STR/AFP/Getty Images)
China

Xu Tequan was a hardcore member of China’s middle class until two explosions ripped through a warehouse in the coastal city of Tianjin on Aug. 12.

But the explosions at the chemical warehouse, which had the force of 21 metric tons of dynamite, shattered both her windows and her middle-class insulation from the vagaries of the Communist Party governance and regulation.

As soon as the blasts occurred, Xu scrambled into her Toyota Corolla and drove 20 miles to a cousin’s home. Now, she’s one of many who have been exposed to the darker side of one-Party rule—the kind that middle-class people read about online, but didn’t think they would experience themselves. Many of them have even become petitioners, those at the bottom of the heap—the ones who stream in from the countryside and stand outside official buildings begging for the state to redress an injustice.

“We lost our homes. Do you think this is something trivial? Do you think this is like a coal mine disaster, and everything will be fine after you pay each miner about hundreds of thousands of yuan?” Xu said to The Initium, a Hong Kong-based news website. She was granted a pseudonym to speak candidly and in a manner critical of the regime. “We have been patient and tolerant because we have good characters.”

Xu and many of her peers charge that the authorities have been tightfisted with the promised compensation, and even resorted to strong-arm tactics to silence their complaints.

The huge black crater that is now in place of what was once a warehouse, which stored large quantities of dangerous chemicals, charred steel carcasses of cars, and hollowed out buildings only tells part of the tragedy that took place on Aug. 12.

The state-run news agency Xinhua puts the latest death toll at 164, while overseas Chinese media estimates casualties in the thousands. Burning rain fell from the skies, and scores of dead fish swept up on the shores of a local river days after the blast.

About 17,000 apartments, some located barely a third of mile away from ground zero, were damaged by the blast. Some apartments half a mile away had their windows shattered and curtains ripped apart. Other buildings nearby were directly affected: soon after the explosions, surveillance footage circulated online showing a man standing in the lobby of one building before it was suddenly engulfed by an explosion that also destroyed the camera.

Seeking compensation for their damaged property, hundreds of residents who lived in the affected areas have been protesting in front of the Binhai New Area district government offices since Sept. 3. Local police have suppressed and arrested these petitioners, who claim that all they are asking for is a fair deal.

Deals have been cut. One is that private companies would buy homes at 1.3 times their market value, and the local government would dole out 6,000 yuan ($940) to residents over three months to foot their rental fees. Over 9,000 residents are said to have taken up that offer.

But many call it insufficient. Just 6,000 yuan isn’t enough for three months, Xu said. “Besides, there is nothing in a rented place. Don’t you need to buy cooking pots, pans, and a ladle?” There are also questions about how long the relocation will take.

Security police have infiltrated the online chat groups of frustrated homeowners, and complaints on social media about unjust compensation have been swiftly removed from the Chinese Internet, and one hospital worker was threatened with being sacked from her job if she didn’t pocket the compensation offer, according to Radio Free Asia.

When an RFA reporter asked a developer whether they had come to terms of compensation with the authorities, an official with the company said:  “We’re still in discussions. If we believe in the Communist Party and love the government, everything will be okay.”