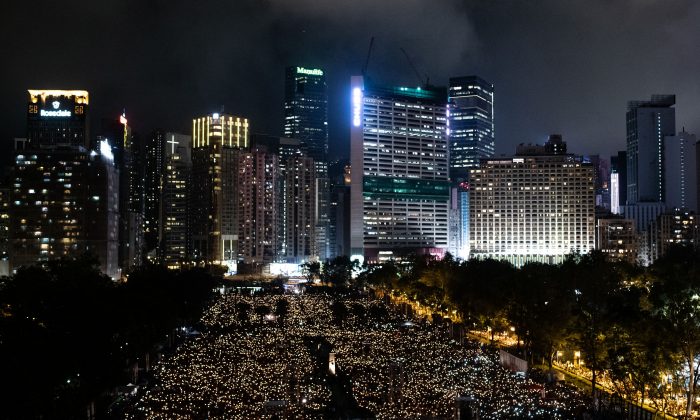 While the Chinese regime’s propaganda machine is in full swing preaching the Party’s successes prior to China’s National Day, expatriate Tiananmen Square Massacre survivors are worried about the personal safety of their supporters in Hong Kong.

October 1 is China’s National Day. Each year, the Chinese Communist Party (CCP) considers the weeks around that date to be politically sensitive. It is routine for the regime to punish its opposition leaders during this time as a way to warn them to not challenge the one-Party ruling system.

This year, Tiananmen Square Massacre survivors around the world focus their concerns on the dissolution of the Hong Kong Alliance (Hong Kong Alliance in Support of Patriotic Democratic Movement of China), and 12 Hong Kong pro-democracy leaders who were recently sentenced for their involvement in organizing last year’s annual memorial for the victims of the massacre.

The Epoch Times interviewed several survivors of the massacre for their comments.

“The Hong Kong Alliance has been the main organization and the core of Hong Kong’s democratic movement. It was also the beacon and the institution that carried the legacy of the 1989 pro-democracy movement through the last 32 years. Thus, it was a thorn in the eyes of the CCP once it [the communist regime] had full control of Hong Kong,” said Zhou Fengsuo, president of Humanitarian China, a U.S.-based organization with the mission of providing humanitarian support in China.

Zhou was one of the student leaders of the 1989 pro-democracy protests in Beijing. The regime’s bloody crackdown on the movement on June 4, 1989, has made the date an iconic day for China’s pro-democracy supporters.

Two main activities organized by the Alliance have been the annual candlelight vigil around June 4, and a museum displaying historical items related to the massacre. The annual event has been supported by Hong Kong society since 1989. Participants in the event have numbered more than 100,000 for many years.

The Alliance came under direct political pressure from Beijing after China regained control of Hong Kong in 1997. In August of this year, the Hong Kong authorities ordered the Alliance to submit all of its meeting records, information on its members, and financial resources since 2014. The Alliance refused to obey.

On Sept. 25, the Alliance publicly announced that it was disbanding operations, which effectively ended the 32-year tradition that was many people’s last hope for China’s democratic future.

The Hong Kong authorities ordered closure of the 6.4 (June 4) Museum in Hong Kong, which was operated by the Alliance. The police searched the museum and took away most of the exhibition items and files.

In the past, the authorities allowed the Alliance’s annual event, but stopped issuing event permits in 2020 using the excuse of public health concerns because of the pandemic.

“Many people from mainland China went to Hong Kong to participate in the annual events before,” said Cheng Kai, a political refugee who fled China to the United States in 1990. Cheng was the chief editor of Hainan Daily, the official state-owned newspaper of Hainan Province in China and a strong supporter of the 1989 student pro-democracy movement.

Cheng describes today’s Hong Kong as a city completely controlled by the police, the same way mainland China is ruled by the CCP. He sees no hope for Hong Kong’s future because both the education and the judicial systems are under the direct control of the regime.

Cheng said that Hong Kong’s schools and universities use textbooks approved by the state, and education has become a part of the brainwashing process as per orders from Beijing. He also said that Hong Kong’s judicial system has been forcing out the judges from the United Kingdom and replacing them with ones loyal to the CCP.

“What has happened in Hong Kong was exactly what we predicted two or three years ago,” said Fang Zheng, president of Chinese Democratic Education Foundation, a U.S.-based pro-democracy organization. Fang was a college student who participated in the 1989 pro-democracy movement in Beijing. Both of Fang’s  legs were crushed by a Chinese military tank during the violence. He moved to the United States in 2009.

Fang admires Hong Kong’s democratic leaders for choosing to not leave Hong Kong, and continue the fight for freedom. “Hong Kong will keep its freedom spirit as long as the fights continue,” Fang said.

Hong Kong will become a city in which “all capital, all assets, and all people belong to the Communist Party,” said Elmer Yuen, president of Hong Kong Freedom Beacon, a U.S.-based organization with the mission of supporting Hong Kong’s freedom.

Yuen told The Epoch Times that he was born in Shanghai. He said the city became a communist stronghold less than 10 years after the CCP took over in 1949. Yuen believes that what happened to Shanghai will happen to Hong Kong.

“The crackdown on the Hong Kong Alliance signals that Hong Kong is not the city that it was for the last [one] hundred years,” said Ken Chen, a board member of Northern California Hong Kong Club. Chen believes that more crackdowns and more arrests will come.

“The regime has no bottom line now. Xi Jinping doesn’t even care about how the international society will look at them anymore,” said Zheng Yun, Chairwoman of the Northern California branch of The Federation for a Democratic China, a Canada-based organization that advocates for the democratization of China.

“There shouldn’t be any wishful thinking for CCP’s future political reform,” Zheng asserted.