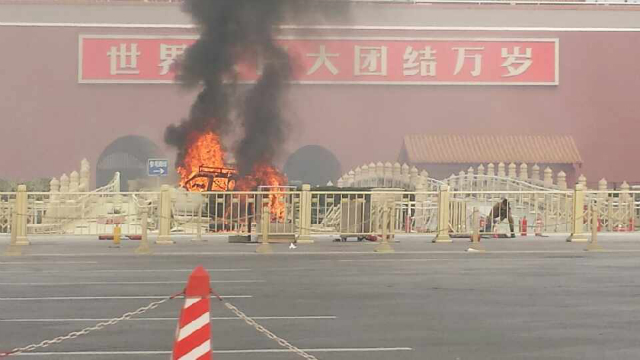 A fire broke out on Tiananmen Square on Monday, prompting an evacuation and closure of the tourist attraction.

The sensitive area is often under heavy guard.

Chinese police closed the road that runs through the square, a witness told Reuters.

The Beijing government and police both said they didn’t know what happened. Xinhua, a state-run media outlet, said via Twitter that a motor vehicle “went into the crowd.” It later reported that three people died.

Reports on Weibo, a Chinese Twitter-like social media service, indicated that people believe that there was a self-immolation (that someone or more than one person set themselves on fire). Many of the photos posted online are being deleted, as is often the case in the heavily censored country.

A foreign tourist on the square said that she heard an explosion, then a fire.

Philip Wen, a China correspondent for the Sydney Morning Herald, posted a photo showing police officers cleaning up after the fire.