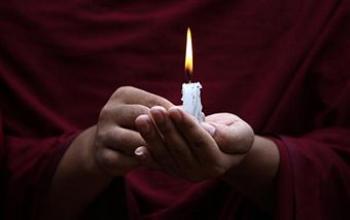 Tibetans in-exile held a candlelight vigil in Kathmandu on June 5, 2009, to mark the 20th anniversary of Beijing's crackdown on pro-democracy protesters in Tiananmen Square. (Prakash Mathema/AFP/Getty Images)
US

20 Years After the Tiananmen Square Massacre

To the rest of the world it was a bloody massacre that crushed the blossoming hope of democracy under the tank-tracks of a tyrannical regime. But to the ruling regime in China it is still touted as a heroic toppling of “counter-revolutionary” forces.

Twenty years on, the events of June 4th in Tiananmen Square remain a subject of enormous sensitivity in China and are still steeped just as heavily in propaganda and information control as the day they happened.

“They hide the truth of their bloody repression so the younger generation do not know what happened with the tragedies and social disasters,” said Thomas Shao Jiang, who witnessed events that day in Tiananmen Square. “That is how the Chinese Communist Party can suppress people – by using propaganda generation after generation.”

Thomas, now 41 and living in the UK, was a student at Beijing University at the time. He explains the mood amongst the students, who had gathered in the square in the weeks running up to June 4th.

“We wanted to fight for democracy; we wanted to fight for our civil rights, our freedom and against oppression. We didn’t know what would happen, because the military actions against the civilians, we just think about maybe the government use police, we never imagined the tank would crush the bodies or use machine guns to shoot the people.”

Events leading up to the massacre of June 4th started a couple of months earlier, with the protests gradually gaining momentum.

The army had been called in two weeks’ prior to June 4th, and was then withdrawn, while the communist ruling elite figured out how to handle the situation, and how to get reluctant army commanders to take their tanks into Beijing.

“I heard the killing begin at 9.00p.m. on June 3rd on the evening,” says Thomas. “I just ran from Tiananmen Square towards the Western Chang’an Street. I saw a lot of people shooting on the street. The tank kept a high speed and smashed all the barricades on the road.

“Soldiers were shooting people, anyone who was a witness and just walking on the pavement. I ran to catch up with the tanks. A lot of students and civilians kept running to the tanks to try to stop them.

“A lot of people were saving people’s lives when they were shot and moving people’s bodies to the bicycles to go to hospital. My classmate was shot. It was most sad. He had a video camera and tried to capture the shootings, until he was finally shot by a soldier. The people moved his body to the army hospital who then refused to help him. He lay on a bed for six hours until he died. A teacher I knew at the University was killed.”

Killings like those Thomas describes were widely witnessed in Beijing, notably in Tiananmen Square, and accounts are consistent with a massacre of thousands. Some sources put the number of deaths as high as 7,000, but there has never been an accurate estimate made because the regime controlled the situation and information so tightly. The Chinese Red Cross initially claimed that 2,600 were killed, but this figure was quickly withdrawn and the Chinese Communist Party (CCP) put the death toll at 241.

Despite numerous eye-witness accounts to the contrary the regime stated “not one person” was killed in Tiananmen Square and that those 241 people died when PLA troops and “rioters” fought in the streets.

The regime has never budged from its denial of mass killings or its rhetoric of a heroic battle against violent “counter-revolutionaries”.

“A number of people who remain in prison were convicted of ‘counter revolutionary’ crimes that were removed from the Chinese Criminal Code in 1997,” said Roseann Rife, Amnesty International’s Asia-Pacific Deputy Director.

“Not all of those who have been imprisoned for their association with the Tiananmen pro-democracy movement actually participated in the protests 20 years ago,” says a letter from Amnesty International published this week.

“The Chinese authorities’ ongoing suppression of public discussion of the events means that many have been sentenced to imprisonment after 1989 simply for exercising their right to freedom of expression, for example, by hosting online discussions or posting poems commemorating the crackdown on the internet.

“The Chinese government has thwarted any attempts to shed light on the military crackdown that resulted in hundreds of deaths and injuries in June 1989. In the lead up to the 20th anniversary of the protests, the authorities have even intensified a current crackdown on activists and lawyers.”

Thomas, like many of those who witnessed the events of June 4th, also does not believe that the regime has changed in nature since the massacre 20 years ago, just adjusted its tactics:

“I think what is the same is the political institution and mentality. They hold a monopoly of power and don’t want people to have civil rights. This is the same.

“The different thing is that the CCP has made a deal with capitalism to use economic interest to soften democratic countries’ pressure and damage homeland values and democracy principles. This is the softer way to some extent different to 1989.”

The Tiananmen Square incident mirrored some fundamental shifts in power within the ruling elite of the communist party that are still felt today.

Jiang Zemin was once asked by a reporter about the story of a female college student who, because of her involvement in the June 4th student movement in Tiananmen Square, was transferred to a farm in Sichuan Province to carry bricks from one place to another and was raped repeatedly by the local peasants. He replied, “I don’t know if what you said is true or not, but that woman is a violent rioter. Even if it were true, she deserved it.”