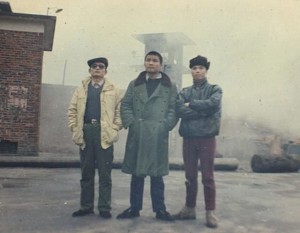 Chinese citizen and one of the “Three Tiananmen Gentlemen,” Yu Zhijian is one of the originators of the hunger strike movement in Hunan province, China. From February 18 to 22, ten Hunan citizens carried out a five-day relay hunger strike to support the nationwide relay hunger strike for human rights movement. Mr. Yu was summoned for questioning by the national police on February 18, during which time the police forbade any visits by Yu's family. After more than 48 hours, on February 20, Yu's sister received a criminal detention notice accusing Yu of the “crime” of “subverting the government.” This is the first official arrest since the beginning of the hunger strike movement.

After hearing news of a nationwide human rights hunger strike group initiated by Gao Zhisheng and other human rights advocates, Yu Zhijian spontaneously organized a ten-man hunger strike group in Hunan to support the movement. As of now, in various locations of Hunan, at least ten dissenting persons have been questioned and threatened by the police. Among them are Hu Min, Wang Zhaopo, Chen Shaowen, Xie Zhangfa, and Zhou Dajiao.

Yu was abducted by the national police on February 18, and his whereabouts are still unknown. According to some friends, a reason for Yu's arrest this time could be that Yu had published some articles on the Internet. On February 20, Yu's family received a criminal detention notice with the “criminal” charge of “subverting the government.” Usually, an official arrest notice is issued one month after the criminal detention notice, followed by prosecution.

Renowned Attorney Zhang Jiankang: “It is the Chinese Communist Party that is Illegal”

Zhang said, “This kind of conduct is illegal, to be given a crime of “overthrowing the government” just because one is carrying out a hunger strike at home—it is like one does not even have the right not to eat. This is completely illegal. Based on this logic, I have published two articles on the hunger strike daily record, so should not Gao Zhisheng and I be detained even more so?”

Yu Zhijain, Yu Dongyu, and Lu Decheng were given heavy sentences because they threw paint-filled eggshells on the portrait of Mao Zedong that hangs on the Tiananmen Gate Tower. They were later honored as the “Three Tiananmen Gentlemen.”

Yu Zhijian was originally sentenced to life imprisonment. The sentence was later changed to 16 years, and Yu was released in 2001. Yu Zhijian has been rushing about ever since with an all out effort to gain the early release of Yu Dongyu from prison. Yu Dongyu was just released on February 22, but he has gone insane after 17 years of imprisonment.