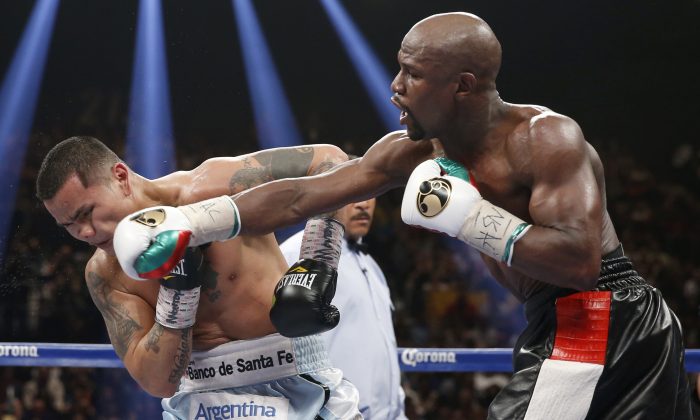 Floyd Mayweather Jr., right, connects with a right to the head of Marcos Maidana, from Argentina, in their WBC-WBA welterweight title boxing fight Saturday, May 3, 2014, in Las Vegas. (AP Photo/Eric Jamison)
Entertainment

T.I. and Tiny Harris both responded to a claim made by Floyd Mayweather Jr.

According to TMZ, the two said they’re not going to get caught up in his allegations. This comes a few weeks after T.I. reportedly got into a fight with Mayweather in Las Vegas. “I hope he is enjoying himself. God bless him,” TI reportedly said when asked about him.

Mayweather allegedly made a claim that he slept with TI’s wife, Tiny. Mayweather also clarified to the website that he was misunderstood when a video of him surfaced allegedly saying that.

TMZ reported on Thursday that Tiny wants to put the incidents with Mayweather behind her. “But this week, we asked Tiny if the two would ever bury the hatchet — and judging from her answer, she’s ready to stop the fighting and finally move on,” the site says.

Meanwhile, both Tiny and T.I. have each released “love and diss songs” that target one another, according to a report.

Hollywood Life says the two are trying to get out their emotions amid drama with Pay-Per-View boxing champ Floyd Mayweather Jr.

Mayweather is slated to fight Marcos Maidana in a rematch this September.

LAS VEGAS (AP) — Floyd Mayweather Jr. can now organize and market fights in Nevada all on his own.

Boxing promoters are responsible for everything from insuring fighters against injury to paying for drug tests and hiring a ring announcer.

Mayweather Promotions CEO Leonard Ellerbe said the company knows what it takes to be successful and will continue to grow the sport of boxing, according to the Las Vegas Review-Journal.

Mayweather is a licensed promoter in Washington and New York. Ellerbe said the boxer plans to seek licenses in other states.