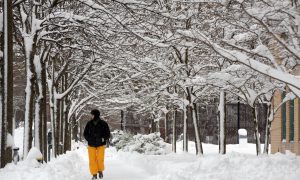 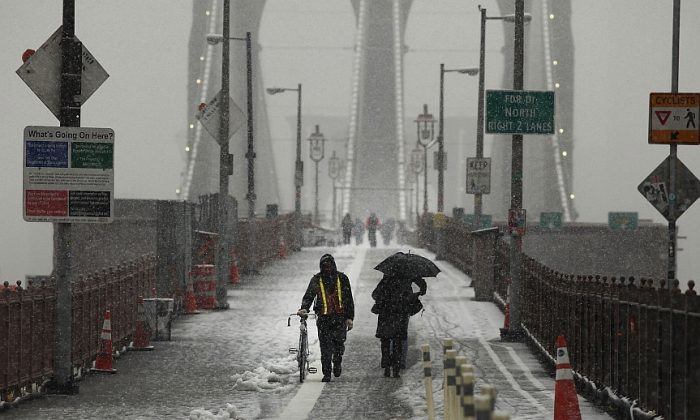 People make their way across the Brooklyn Bridge during the season's first snowstorm on Dec.10, 2013, in New York City. Another storm system is predicted to affect 70 million people from the Midwest to the Northeast this week. (Spencer Platt/Getty Images)
US

A pair of major snowstorms will join forces to affect about 70 million people in the Midwest and the Northeast, AccuWeather predicted.

Arctic air will push into the Midwest and the Northeast, bringing dangerously low, subzero temperatures in places, the National Weather Service (NWS) predicted.

“Bitter cold will continue over the Northern Plains and Upper Midwest with temperatures running as much as 20 to 30 degrees below normal,” according to NWS.

UPDATE on THURSDAY: Hercules Dumping Snow Across the United States

Gale warnings apply to most of the Atlantic coast.

In New York City, temperatures are predicted to be the coldest since 2009. “If New York’s Central Park fails to reach 20 degrees for a high temperature on Friday, it will be the first time this has occurred since Jan. 16, 2009,” stated Long Range Weather Expert Jack Boston in an AccuWeather news release.

In Pennsylvania on New Year’s Eve, heavy lake effect snow with wind gusts up to 30 miles per hour made travel dangerous.

In New York, travel weather should be fine until Thursday night, when snow may delay flights and make driving hazardous. Accumulations up to 12 inches are predicted for upstate New York. Michigan expects heavy lake effect snows from Lake Huron. Heavy snow may fall from Iowa and Illinois to Indiana, Ohio, Kentucky, West Virginia and part of Lower Michigan and southern Wisconsin, affecting travel Thursday and Friday.

The storm is forecast to bring a large area of 6- to 12-inch snowfall.

According to AccuWeather, 6 inches to 12 inches of snow may fall from Pennsylvania to New Jersey and southeastern New York state to southern New England. The metropolitan New York area, Long Island, Albany, N.Y., and Scranton and Allentown, Pa., should get that much snow, some of which will fall too fast for plows to keep up.

Even heavier snow, more than a foot, may fall on Massachusetts, Rhode Island, and Connecticut, including Hartford, Conn., Providence, R.I., and Boston.

“The storms will not organize fast enough to make the perfect storm, but it will cause a significant amount of snow to fall over a large area,” stated AccuWeather.com Chief Operating Officer Evan Myers in a press release.