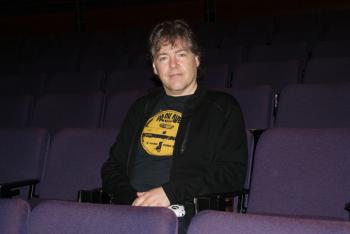 Throw Down Your Heart: A Journey through Africa in Search of the Banjo’s Roots

By Lisanthi Caldera
Print
Sascha Paladino’s documentary Throw Down Your Heart was screened in Toronto last weekend as part of Luminato, a festival of arts and creativity. The movie follows the world famous Banjo player, Bela Fleck, on his journey through Africa to discover the beginnings of his beloved musical instrument, the banjo.

Fleck, a New Yorker, has played the Banjo for over 30 years, having fallen in love with the instrument when he was 15. His musical talent has been recognized with 11 Grammy awards.
Fleck is the “King of Banjo” said Bassekou Kouyate, a ngoni player who was in Toronto with Fleck to promote the movie and to participate in an open air concert to celebrate African music.

In the movie Fleck travels through Uganda, Tanzania, Gambia, and Mali as he searches for the banjo’s African roots. He meets and makes music with many famous African musicians who play precursors to the banjo, such as the ngoni and akonting.

He also plays banjo with Oumou Sangare, the Malian diva who sings a beautiful and haunting song about a songbird who sings for children who lost their fathers. The song highlights child poverty and social conditions in Africa—challenges that Sangare herself faced as a child.

Commenting on Fleck, Sangare said the banjos player is far better at expressing himself though his music than he is verbally. As he travels in Africa, Fleck is able to overcome the language barrier through music, proving that music really is a universal language.

Though the banjo is thought to be an American instrument, it was actually brought to the United States by African slaves.

Throw Down Your Heart, or “Bagamoyo” in Swahili, refers to a port city in Tanzania. Bagamoyo is now designated as a world heritage site. But until the end of the nineteenth century, this was where the slaves from the interior of Africa were brought to be shipped off to foreign countries. Bagamoyo was their last stop in Africa, and once they arrived there they knew they would never again see their homes or their loved ones.

This is where they throw down their hearts and await their cruel fate.

Many slaves died during the long sea journey, but it was noted that ships that carried a banjo experienced less fatalities. The instrument helped the slaves keep their spirits alive and to take a part of Africa with them. Once they arrived in America they continued the tradition of making and playing the banjo, which was passed down from family to family, from one generation to the next.

The movie received a standing ovation in Toronto. The audience, which included some musicians, was very engaged in the film. Many both laughed and cried.

“I found the movie really moving,” said Rae Ellen Bodie from Toronto. “I love banjo, it is part of my history.”

Fleck said Throw Down Your Heart is for “people just curious about the world.”