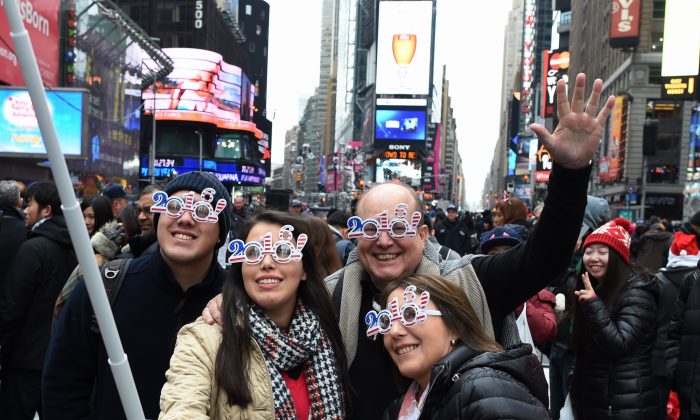 Revelers take selfies as they gather in Times Square ahead of the ball drop in New York on Dec. 31, 2015. (Don Emmert/AFP/Getty Images)
New York

NEW YORK—A throng of 1 million revelers in Times Square rang in the New Year with raucous cheers and a blizzard of confetti, striking an optimistic, even defiant, tone amid jitters over extremist attacks and heavy security that included 6,000 police officers.

“You haven’t lived until you’ve experienced Times Square on New Year’s,” said Eric Robertson, 25, of Philadelphia, who kissed his girlfriend as the crowd counted down the seconds to the New Year and the ball dropped at the stroke of midnight.

Partygoers from around the world had waited hours at the famed Manhattan crossroads—some since before dawn—for the countdown. Mayor Bill de Blasio pushed the button to send a 11,875-pound Waterford crystal ball into its minute-long decent.

As the clock struck 12 o’clock, cheers erupted as fireworks shot into the sky and people shared hugs and their first kisses of the year.

The revelers were protected by an unprecedented number of police officers—some in civilian clothes, many heavily armed—as well as rigid security screenings.

“This is the iconic New Year’s celebration for the world,” New York Police Department Commissioner William Bratton said. “We have no threats we’re aware of directed against this event tonight but nevertheless we still plan for the worst and then expect the best.”

Officers from the NYPD’s elite emergency services unit surveyed the scene from Times Square rooftops, peering below through binoculars and scopes as snipers stood beside them. Heavily armed officers carrying tactical rifles stood on nearly every corner for blocks as police helicopters buzzed overhead after checking in on other parts of the city, including the World Trade Center and Statue of Liberty.

Despite Fears and Huge Fire, New Year’s Celebrations Roll On

Some in the crowd admitted to being nervous to gather in such a famous location in the weeks after the Paris and San Bernardino attacks. Just hours earlier Thursday, an ex-con was charged in upstate New York with planning to carry out a New Year’s Eve attack at a bar to prove he was worthy of joining the Islamic State terror group. That case prompted the city to cancel its New Year’s Eve fireworks celebration.

Ashley Watters, 18, a freshman at Temple University hailing from Gettysburg, Pennsylvania, called the threat of terrorism “the elephant in the room.”

“I talked to my dad before I left and said ‘I love you and hopefully ISIS doesn’t come,'” said Watters. “My dad said, ‘Keep your eyes out.’ He feels the same way, you can’t live in fear. I’m not going to miss out on an opportunity.”

Others were heartened by the massive security presence for the party to send off 2015 that featured musical acts by Carrie Underwood, Nick Jonas and Demi Lovato and temperatures that, to the relief of the bundled-up spectators, stayed well above freezing.

“I actually believe this is the safest place in the world,” said Eku Kabba, 27, who has made the trip from Gaithersburg, Maryland to Times Square for the last five years.

“It could happen anywhere, but you can’t start the world panicking,” he said as a recording of the James Brown song “Living in America” blared from the stage. “Look around; there are men in uniform everywhere.”