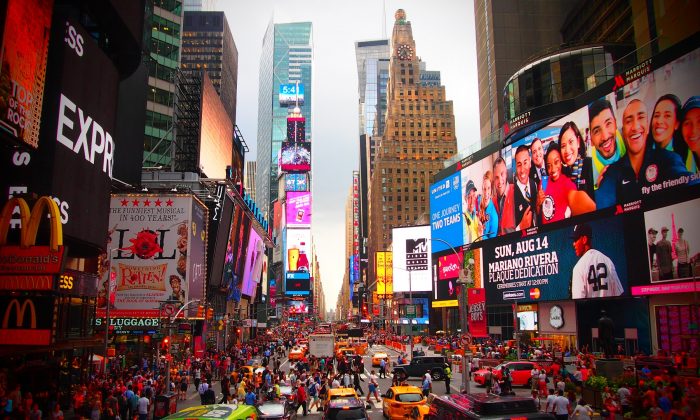 NEW YORK—Maybe a million revelers are expected to navigate through high security in the blocks around Times Square to cheer on the new year with entertainers including Mariah Carey and watch the descent of the glittering crystal ball.

People from around the world, and at least some New Yorkers, will start gathering in tightly policed viewing pens in mid-afternoon.

It’s a choreographed, made-for-TV affair featuring pop stars on multiple stages, fireworks at midnight and lots of standing around in the cold for people who brave the event in person.

For more than two decades, security has gradually been tightened for the event.

Recent deadly truck attacks in Germany and France brought about another security upgrade this year. Dozens of 20-ton sanitation trucks weighted with an extra 15 tons of sand will block off streets leading to the celebration zone.

About 7,000 police officers, along with specially armed counterterrorism units and bomb-sniffing dogs, will be on guard.

This year, United Nations Secretary-General Ban Ki-moon has the honor of pushing the Waterford crystal button that begins a 60-second countdown to 2017.

Carey is the headline performer in Times Square for “Dick Clark’s New Year’s Rockin’ Eve with Ryan Seacrest” on ABC. Other featured acts include pop-rock band DNCE, country star Thomas Rhett, Gloria Estefan and the cast of her Broadway musical, “On Your Feet!”

After the crowd leaves, cleanup will be left to a small army of city employees including 235 sanitation workers, 45 police officers and two deputy police chiefs.

Last year, the crews removed more than 44 tons of debris.