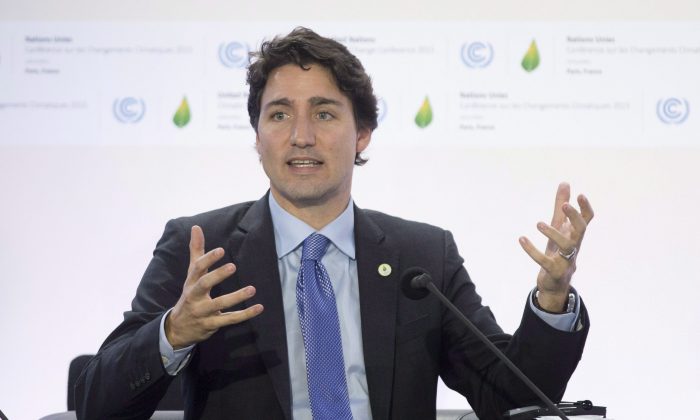 Prime Minister Justin Trudeau speaks at the United Nations climate change summit on Nov. 30, 2015, in Le Bourget, France. The speech from the throne Dec. 4 marks the start of a new session of Parliament. (The Canadian Press/Adrian Wyld)
Canada

Throne Speech to Focus on Immediate Priorities for New Government

OTTAWA—The Trudeau government’s first throne speech is likely to be one of the shortest in Canadian history.

Insiders say the speech, to be read by Gov. Gen. David Johnston on Dec. 4, will be little more than a list of the new Liberal government’s immediate priorities, with minimal rhetorical flourishes and no surprises.

It won’t mention every federal department, nor will it recap every single promise made by Prime Minister Justin Trudeau during the federal election campaign.

Rather, it will be a brief recitation of the urgent promises Trudeau intends to move on over the coming year—those aimed at improving the lot of struggling middle-class Canadians foremost among them.

The brevity and tight focus of the speech is modelled on throne speeches in the mother of Parliaments in the United Kingdom, which typically run less than 1,000 words and take the Queen less than 10 minutes to read.

The brevity and tight focus of the speech is modelled on throne speeches in the mother of Parliaments in the United Kingdom.

Trudeau’s tax promises made during the election campaign will feature prominently in the throne speech, along with his promise to replace the universal child care benefit with a more generous, tax-free child benefit that is geared to income.

The speech is also expected to highlight promises to invest heavily in infrastructure to boost the sluggish economy, reform Parliament, change the electoral system, develop a new relationship with indigenous people, and promote diversity through, among other things, bringing in 25,000 Syrian refugees.

It will also reiterate Trudeau’s commitment to repair Canada’s relationship with the United States, work with the provinces to combat climate change, and bring to fruition the free trade agreement with Europe.