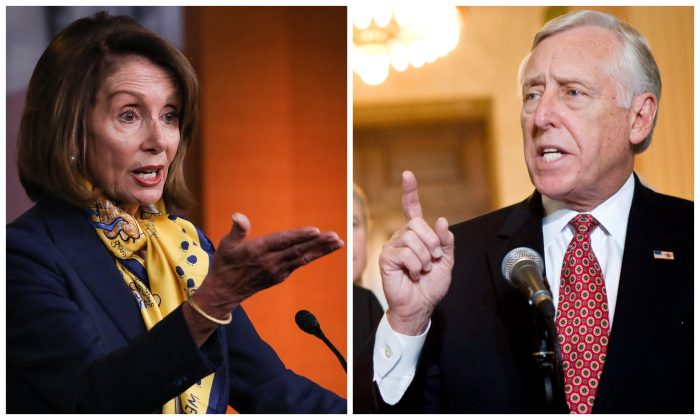 3 Ways Dems’ Surface Unity Could Crack at Any Time

WASHINGTON—New Deal-era humorist Will Rogers—who famously said he was “not a member of any organized political party; I’m a Democrat”—would likely guffaw at his partisan descendants’ current claims of unity.

“I think we are all on some level [sharing] a common purpose. There’s an alignment,” Sen. Kamala Harris (D-Calif.) told Politico on Feb. 15, speaking of the nine Senate Democrats who have announced, or are expected to announce, campaigns for their party’s 2020 presidential nomination.

Similar sentiments were expressed by half-a-dozen of Harris’s Senate-based rivals. Campaign experts know better than to take such happy talk too seriously.

“That will last until we get to the debate stage and that’s in June,” veteran Democrat strategist Jimmy Williams told The Epoch Times. “Until then, there’s plenty of time for ‘Kum ba yah.’”

The reason it will end then, Williams said, is because “at that point, you’re trying to become the nominee, and if you can’t figure out a way to distinguish yourself from the rest of your Democratic colleagues and why you’re better than them, then that’s obviously a problem if you can’t do that.”

That’s why, with as many as two dozen or more candidates on the debate stage “distinguishing” themselves from each other, the “Kum ba yah” will likely end before the moderator asks the second question of the first debate.

Such political necessities, however, are only the first of three potential ruptures in the party’s public face that could erupt into the open in coming months.

The second one was highlighted by the catchphrase question posed by the headline of an op-ed published last week by William Galston of the Brookings Institution, a longtime Democratic centrist policy guru.

“Is Medicare for All a Trap for Democrats?” was the headline of Galston’s piece, both when it was first circulated by the Brookings Institution on Feb. 1, then by The Wall Street Journal on Feb. 12.

“A political party is asking for trouble when it embraces a position on a high-profile issue that most Americans reject. But it’s not easy for a party to avoid this pitfall when a majority of its own members endorse such a position,” Galston wrote.

Galston pointed to a Politico/Morning Consult poll showing 57 percent of Democrats would prefer a candidate pushing for Medicare for All over seeking reforms in former President Barack Obama’s Affordable Care Act.

A similar majority of the public, Galston claimed, would favor the Medicare for All proposal until told it would require ending private health insurance; support then plummets to only 35 percent.

Galston believes Democrats can “square the circle” and defeat Trump in 2020 by supporting both Medicare for All and letting people who want to keep their private insurance do so.

Republicans scoff at the idea that Medicare for All will do anything good for Democrats.

“Even California figured out that Medicare for all means health care for none due to its overwhelming cost,” Americans for Limited Government President Rick Manning told The Epoch Times.

“The only thing that could make this issue a winner for the Democrats is the history of Republican fecklessness and failure on health care.”

Rivalry at the Top

The third potential eruption could come from Republicans encouraging and exploiting the long-standing rivalry between Speaker of the House Nancy Pelosi (D-Calif.) and House Majority Leader Steny Hoyer (D-Md.).

So far in 2019, more than two dozen freshmen House Democrats have sided with Republicans at least once on a dozen motions to recommit major bills for amendments making them more palatable back home in highly competitive districts.

Last week’s House vote to condemn anti-Semitism as part of a completely unrelated bill resulted from such a GOP recommit motion.

“As the GOP continues to peel off rank-and-file Democrats, party leaders have grown alarmed, and are increasingly engaged in finger-pointing about who is to blame for the disunity and what to do about it,” Politico reported Feb. 14.

Even with last November’s 40-seat pickup, Pelosi needs every Democratic vote she can muster, but Hoyer, aided by House Majority Whip Jim Clyburn (D-S.C.), tells freshmen to vote as they think best to keep their edge with voters.

Republicans will use the recommit tactic every chance they get but at least for now, Democratic operatives interviewed by The Epoch Times aren’t worried.

“This idea that Pelosi and Hoyer don’t like each other too much, so what?” Williams said. “No one cares that there’s a rivalry between them.”

Jim Manley, a strategist for the 2016 Hillary Clinton campaign and former communications director for then-Senate Majority Leader Harry Reid (D-Nev.), agreed, saying: “I think way too much can be made over this motion to recommit issue. After all they are simply procedural votes that mean very little. On the big stuff I am confident that the caucus will continue to stick together.”