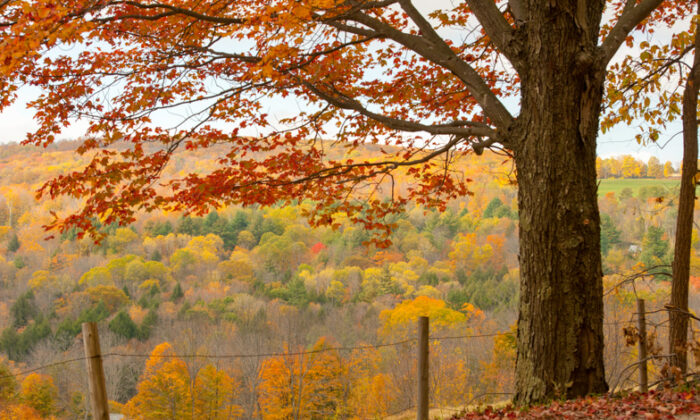 A view from a road looking down at the Vermont countryside which is framed by the branches of this amazing tree and fall folliage. (Cat Rooney)

One of the cards that came this Christmas was different from any I had had in the past. It featured a painting, made by the sender, my sister, of a tree bent over in the wind with some leaves flying off and some still attached to the tree. It was titled, “Just let go.” The painting showed a natural process where no consciousness or choice was involved but the title showed it was a metaphor for the advice given in many religious and spiritual traditions, and some secular approaches to healing.

We readily draw lessons from nature about our own lives. We are beings within nature and subject to its laws but with consciousness (minds or souls). Much in poetry, art, and religion addresses what nature forces on our attention—impermanence, the cycles of birth, growth, fruitfulness, decay, death and the limits of our own control. (Anybody who wants to rule the world, it is said, should try to rule a garden first.)

I will come back to the picture of the deciduous tree, its title, and the relevance for humans, trapped as to some extent we all are in addictions, destructive habits, or dysfunctional attachments. But first, let’s ponder how we use nature metaphors to illuminate our lives and our relation to nature.

Consider three ways we humans look at nature. It’s not a comprehensive list, and the perspectives often overlap. I’ll call them the practical, the spiritual (or mental), and what I call the tropical. The first two are ways we relate to nature as it benefits or nurtures us. The third is about the destructive force of nature, how it threatens us, and how we struggle to hold it at bay.

Farmers value nature for its fertility. It sustains life. It’s productive and workable. It takes detailed and practical knowledge and skills to cultivate crops and convert them into food or commodities for sale on the market.

Theirs is an unsentimental view. Soil is fertile and can be made more so if handled properly. If not, if it’s sterile or exhausted, it’s unsuited for cultivation. It’s useless.

But even when the soil is good, farmers contend with threats and uncertainties, not only with respect to markets and public policy, but also from the weather, while keeping bugs, weeds, and wild animals at bay.

The Romantic poets of the 19th century still depended, as we do to this day, on those who worked the land, who made nature productive for human use. But their personal relation to nature was not practical but emotional or, in its highest expression, spiritual.

Their poetry, in Wordsworth’s phrase, has its origin in “emotion recollected in tranquility.” For him, both the work on the land and the poet’s experience and recollection are solitary matters. Wordsworth’s verse about nature, it seems, is autobiographical.

Take the poem, “The Solitary Reaper,” written in 1805. The poet sees a young woman, “Yon solitary Highland Lass” “[r]eaping and singing by herself.” She is single, alone as she cuts and binds the grain. He listens

… motionless and still,
And, as I mounted up the hill,
The music in my heart I bore,
Long after it was heard no more.

Wordsworth evinces a deep love of nature, an attitude of joy and gratitude (see his “Tintern Abbey” poem) that’s not to be dismissed as a sentimental indulgence.

Many urban dwellers who have no working relation to the land benefit from being “in nature.” A 2019 study found that exposure to nature (in parks, beach, or wilderness) of no less than 120 minutes per week, whether all at once or spread over the week, has important benefits for our mental and physical wellbeing.

Other research, examining evidence from veterans, at-risk youth, and college students, suggests the importance for mental and physical health of the awe we sometimes feel in nature—“that sense of being in the presence of something greater than ourselves that fills us with wonder.”

Both practical and spiritual perspectives see nature in terms of its benefits for humans. But as the U.S. Navy hymn—“Oh hear us when we cry to Thee, For those in peril on the sea”—attests, nature can be perilous.

Gabriel García Márquez (1927–2014), the novelist who grew up in a tropical region of Colombia, depicted nature as a luxuriant threat, something to be kept at bay.

Imagine a general who finds himself on the wrong side of a coup, forced to flee his grand house and estate. Immediately, nature in the form of tropical vegetation and animal life moves in and quickly obliterates all sign that humans ever lived there. Nature from this behavior is a vulture, waiting until the human resident moves, dies, or becomes unable to defend himself.

Even in a temperate climate, gardeners and farmers must deal with weeds and bugs, but the tropics teem with life and fertility. Much of this tropical abundance neither provides food for humans nor induces awe as a Romantic poet or modern urban-dweller might experience. For a human settlement to survive and thrive, its inhabitants must keep at bay the vulture Nature.

The human body, the physical substance of the human organism, is “fearfully and wonderfully made,” as the Psalmist says (KJV, 139:14). But it is itself a battlefield, “occupied” by some 10,000 bacteria and fungi, as well as trillions of viruses. Some are beneficent, even essential for life, but some are lying in wait, so to speak, ready to move in when the body’s defenses—its immune system with antibodies, B, T, and natural killer (NK) cells that identify threats and eliminate them—weaken with age and illness. Even the best exercised, housed, and fed body eventually gives out and disintegrates. As Genesis 3:19 and the Ash Wednesday liturgy remind us, we come from dust and to dust we shall return.

The Leaves and the Tree

Is the advice to “just let go” in the painting’s title meant for the leaves or the tree? Is it telling the leaves to stop clinging to life, to just let go and be blown away to die and disintegrate? Or is it advice to the tree to let go and to not grasp or cling to things (addictions, possessive or controlling relationships, envy, hatred, pride, material possessions, and so on)?

The major religious traditions I know teach non-attachment or detachment in both senses. We suffer by holding on when we need to let go, whether of grown children, addictions and vices, or, when the time comes, life itself. We suffer from craving for things to be other than they are, from trying to be as gods, with more control than we can have. Giving up clinging, grasping, and control is also central to secular health practices that have religious roots, such as Alcoholics Anonymous (AA) and its cousins or Mindfulness Meditation.

Buddhism’s Four Noble Truths speak of the centrality of suffering in our lives, its source in grasping or clinging, its solution in letting go, and the eight-fold path to doing that. The first three of AA’s Twelve Steps are, in brief summary form, 1. I can’t, 2. God can, and 3. Let God. Or even more briefly, “Let go and let God.”

With this wider perspective, we can see Wordsworth’s Romantic nature poetry as more than autobiography or as unhealthily self-obsessed. I had a tutor once at Oxford some 60 years ago who explained the decline of the poet’s powers by explaining that “Wordsworth was the first poet who had ever written so extensively and exclusively about himself. The problem was he ran out of subject-matter.”

That’s a perceptive statement about the poet’s long decline from the height of his powers. But Wordsworth’s nature poetry is, at its best, a kind of meditation. It recalls the poet’s standing in awe before nature and noting his own response as if observed by another. It’s consistent with empirical evidence of the healing effects of spending time (that is, at least two hours a week) in nature—of the awe defined as “that sense of being in the presence of something greater than ourselves that fills us with wonder.”

That response of letting go of the ego-drama of the self (in which I am the producer, director, and star of my own drama) and sensing the presence of the divine is central to many Buddhist and Christian monastic processes of meditation. Those meditation practices are increasingly adapted to healing and pain management in professional health and mental health care.

The tree and the leaves are natural objects, part of nature as we are, but without the consciousness that enables us to think and be aware that we are thinking. As a metaphor, it reminds us of several things that the tree itself and its leaves cannot know—about impermanence, death, and detachment. So should we focus on the tree or the leaves? Yes.