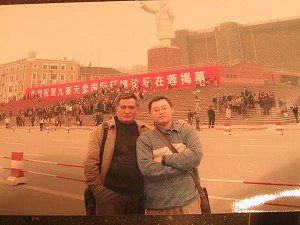 After the conflict, some protestors still remained at the scene. Liu Zhengyou (front left), representative of right protection of farmers who lost their land, Wang Yi (right), author of this article. (The Epoch Times)
China

CHENGDU, China – On October 27, nearly three thousand people, victims of a crooked financing scheme launched by the Dujiangyan City Civil Affair Bureau, gathered on Tianfu Square in the city of Chengdu to seek redress. Most of them were over 50 years old. I joined the gathering as a member of the media.

The investments were supposed to fund the construction of grave towers, mass burial sites such as the one in Baoshan, an exceedingly densely populated district of Shanghai.

The funeral and burial industry is still monopolized by local government. Using the national funeral protection policy as protection, local governments collude with private enterprises to make staggering profits burying people who have no other options. Many elderly people have to spend their life savings to secure space in one of these grave towers.

Throughout the past three years financial irregularities and problems with these elderly people’s investments have surfaced. The Civil Affairs Burea refused to take responsibility, local courts refused to hear related cases, and the media refused to report the story.

While on the square I told the protesters that I was a lecturer at Chengdu University and a member of Independent Chinese PEN Center. Some of the protestors told me that they had no other way to solve this problem within Sichuan Province; staging a public demonstration was their last desperate hope for a solution. I passed out my business card to several protestors.

The police mobilized nearly ten vans to control the situation. Conflict broke out in the afternoon. According to one protestor, police arrested dozens of protestors immediately.

When I came to the scene, there were still about four hundred protestors left. Signs of the struggle were everywhere. I found several policemen’s caps on the ground and the flower decorations in front of the square were completely destroyed.

Protestors held banners reading, “We Want Democracy, We Want Freedom” and “Give my Hard Earned Money Back.” Police were everywhere around the square, and taking photos was forbidden. My friend and I pretended to be tourists photographing each other and managed to sneak the scene in as the background.