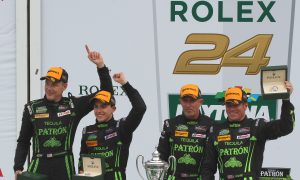 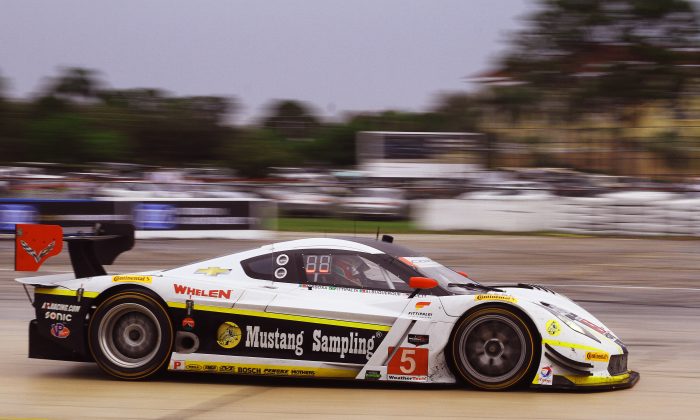 The 2016 WeatherTech SportsCar Championship season is approaching its finale, the ten-hour Petit Le Mans at Road Atlanta, with three Prototype teams locked in a tight battle for the overall honors.

The #5 Action Express Racing Coyote-Corvette, which has won the two IMSA titles awarded so far, has the slimmest of leads—a single point—over its sister car, the Action Express/Whelen #31. The #5 has 253 points, the #31 has 252.

The #10 Wayne Taylor Racing Dallara-Corvette trails by ten points with 242.

Action Express #5 has had a stable driver lineup throughout the three seasons of the United SportsCar Championship, now called the WeatherTech Sposrtscar Championship. Christian Fittipaldi and Filipe Albuquerque drive the sprint races, with Joao Barbosa joining for the endurance events.

The 3#1 AXR has had the same two sprint-race drivers for its two seasons: Eric Curran and Dane Cameron. For Petit, the pair will be joined by newly-crowned 2016 IndyCar champion Simon Pagenaud.

Wayne Taylor Racing will be represented by the Taylor brothers, Ricky and Jordan, and their usual endurance co-driver, Max “The Ax” Angelelli.

Only these three teams have a reasonable chance of winning. VisitFlorida Racing and Michael Shank Racing have the numerical possibility, but only if all the top teams fail to finish.

With Ganassi Racing moving from Prototype to the GT Le Mans class for the 2016 season, Action Express and Wayne Taylor Racing have basically ruled the Prototype class.

The 2015 race was run in hard rain, cut in half due to flooding, and was won by a GTLM Porsche. The #5 Action Express Coyote finished third overall, first in the Prototype class. The #31 AXR car finished fifth, and the WTR Dallara, seventh. Ganassi won the Rolex, and Action express won at Sebring. AXR again won the overall title.

This year WTR has scored a pair of wins, at Long Beach and Belle Isle, while the two AXR cars have one each: the #5 won at Watkins Glen, and the #31 at Mosport.

The greatest challenge to these three for the race win at Road Atlanta is the #2 Extreme Speed Motorsports Ligier-Honda, which won the Rolex 24 at Daytona and the 12 Hours of Sebring, and would dearly like to win the season’s final endurance race of the season, and also the North American Endurance Cup.

The NAEC is a four-race series-within-the-series featuring the four longest races: The Rolex 24, the Sebring 12 Hours, the Watkins Glen 6 hours, and the ten hours of Petit Le Mans.

Attrition is always a factor at endurance races. With 41 cars entered, traffic as well as time make every outcome uncertain. One car could lead at four and eight hours and break before the finish; cars which lose laps early can regain them during caution periods and factor in at the finish.

Any of the top three have an equal chance at winning overall, winning the championship, and either AXR car could win the NAEC.

There are 15 NAEC points available at Road Atlanta: five for leading at four hours, eight hours and at the checkered flag.

Petit Le Mans at Road Atlanta, takes the green flag at 11:10 a.m. on Saturday, Oct. 1. The race will be broadcast on Fox Go, IMSA TV at IMSA.com, and in part on Fox Sports 1 and Fox Sports 2. Check local listings for more details.

Live Timing and Scoring as well as audio coverage by IMSA radio will be available at IMSA.com.

If Scuderia Corsa driver Christina Nielsen and her co-drivers Alessandro Balzan and Jeff Segal in the #63 Ferrari 488 take the green flag at Petit Le Mans, the team will win its second consecutive GT-Daytona title. If Nielsen completes her minimum three-hour drive time she will become IMSA’s first female champion.

Alex Riberas and Mario Farnbacher plus co-driver Ian James in the #23 Team Seattle/Alex Job Racing Porsche 911 GT3-R have 261 points, putting them in contention for a top-three points finish.

Four teams have a shot at the GT Le Mans championship. Corvette Racing drivers Oliver Gavin and Tommy Milner (with co-driver Marcel Fässler) in the #4 C7.R lead the field with 314 points, followed by Richard Westbrook and Ryan Briscoe (with co-driver Scott Dixon) in the #67 Ford GT have 303.

Dirk Werner and Bill Auberlen in the (with co-driver Augusto Farfus) in the #25 BMW Team RLL BMW M6 GTLM could conceivably earn a top-three finish if the rest of the field got unlucky; the BMW drivers have 275 points.