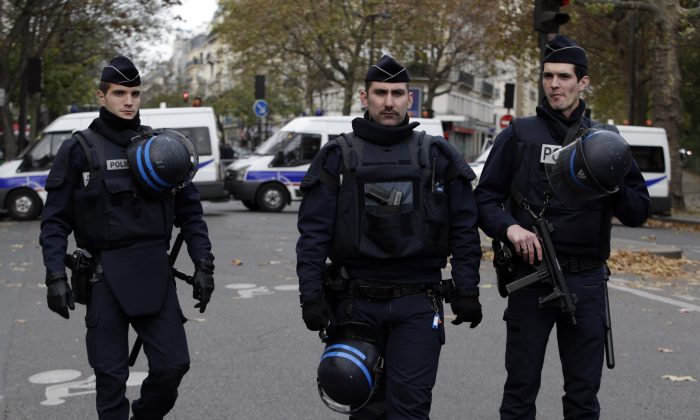 Policemen patrol near the Bataclan theatre in the 11th district of Paris on Nov. 14, 2015, after a series of attacks on the city resulting in the deaths of at least 127 individuals. (Kenzo Tribouillard/AFP/Getty Images)
Europe

Three people linked to the Paris terror attack were arrested in Germany by a SWAT team on November 17.

Two men and a woman were taken into custody in Alsdorf near Aachen, near the border with Belgium.

It’s unclear what exact connection authorities believe the trio have with the attack, which left over 100 dead and hundreds of others wounded.

Terror group ISIS, or the Islamic State, took credit for the deadly attack, which included shootings and bombings.

Police spokesman Werner Schneider told German broadcaster n-tv that it is “much too early to go into detail” about the identity of those arrested, but confirmed they are foreign nationals.

He added that police are conducting more searches in the area.

The alleged “mastermind” of the attack grew up in Belgium. Police have also been searching for suspect Salah Abdeslam, one of the few attackers still alive after the attacks, in Brussels, about two hours from Aachen.