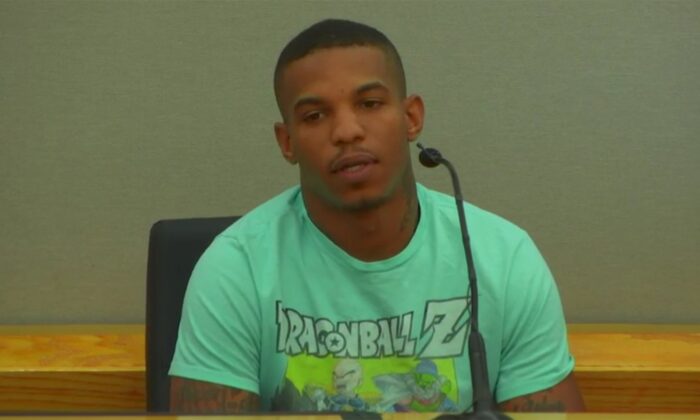 Joshua Brown teared up as he testified last month in the murder trial of a former Dallas police officer convicted of shooting and killing their neighbor in his own home. (Pool via CourtTV)
US News

Dallas police officials announced on Oct. 8 the identity of three men they said participated in the killing of Joshua Brown, a witness in the Amber Guyger murder trial.

The men traveled from the city of Alexandria in Louisiana to buy drugs from Brown, Moore said, naming Green as “the facilitator.”

After arriving at the meeting spot on Oct. 4, Green got out of the car and started talking to Brown.

The conversation “escalates into physical altercations,” Moore said. Jacquerious Mitchell said he got out of the car, but Brown told him to get back into the car and shot Mitchell in the chest.

Mitchell told police officers that as he lay in the vehicle, he heard two additional gunshots. He said Green shot Brown two times. According to an autopsy on Brown’s body, he was shot two times in his lower body.

Green took Brown’s backpack and gun. Michael Diaz Mitchell was the driver. After speeding away from the scene, he dropped Green off at an unknown location and Jacquerious Mitchell off at a hospital.

Police officers later served a search warrant on Brown’s apartment, where they confiscated 12 pounds of marijuana, 143 grams of THC cartridges, and $4,000 in cash.

Brown’s attorney S. Lee Merritt has not responded directly to the police announcement but said just prior to the press conference that the Dallas Police Department should recuse themselves from the investigation.

“The reliability of any arrest/prosecution will be undermined by their involvement,” he said in a statement.

“The State knew Joshua Brown didn’t want to testify due to concerns for his safety. He flew to California when the trial began. They threatened him with jail if he didn’t return. He went straight from the airport to the court. Dallas County has a duty to protect him. They failed,” he added in another statement earlier on Tuesday.

Brown was a key witness for the prosecution in the Guyger trial. Guyger, a police officer at the time, entered an apartment where Botham Jean resided in Dallas in Sept. 2018. She said that she thought it was her apartment; she lived one floor beneath Jean.

Thinking Jean was an intruder in her own apartment, Guyger ordered him to show her his hands. When he approached her, she shot him. He was pronounced dead at the scene.

Guyger was recently convicted of murder and sentenced to 10 years in prison.