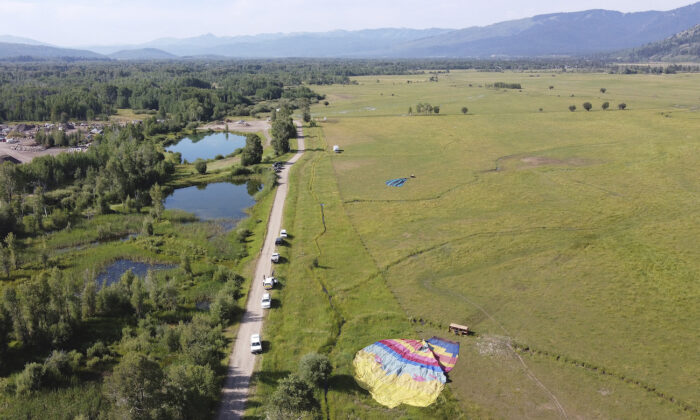 Two of three sightseeing balloons that crashed are seen in an open area of Jackson Hole in western Wyoming, on Aug. 3, 2020. (Brad Boner/Jackson Hole News&Guide via AP)
US News

The crash occurred at about 8 a.m. over an area about two miles south of Teton Village, near Jackson Hole.

No deaths have yet been reported. About ten people were taken to St. John Medical Center for treatment, officials at the medical facility told KIFI. Five of the people have since been discharged, and the remaining five were expected to be released soon, according to the outlet.

At least one person was flown to a hospital in Idaho Falls. According to KIFI, the condition of the person, who was flown to Eastern Idaho Regional Medical Center, is unknown. The outlet noted that there have been conflicting accounts as to how many people were involved or injured.

The three balloons, owned by the same tour operator, Wyoming Balloon Co., did not crash into each other but went down separately, according to Teton County Sheriff Matt Carr. He said the weather was apparently a factor.

Jackson Hole Fire Chief Brady Hansen said that the balloons were not found near each other, and it appeared as though they were suddenly driven to the ground, reported Jackson Hole Radio.

Winds of 9 mph were reported in Jackson Hole shortly after the accident.

The National Transportation Safety Board and the Federal Aviation Administration is investigating the accident to establish the official cause of the crash.

“I couldn’t believe how beautiful everything was,” Phillips told the outlet. “And then we were in hell a few minutes later. It was crazy.”

He added that about 20 people in the balloon he was on were trying desperately to not fall out.

“It was lifting us up and slamming us back down again,” he said.

A 12-year-old passenger, Robert Krayevski, said that he and his family were on a balloon that was dragged across a field and crashed into a fence.

“Our captain fell off while we were in it,” Krayevski told the outlet. “We bounced and went back up in the air by ourselves. The captain was yelling to pull the red ropes. We tipped over and we had to get out because of possible fire. I got out and people were laying on the ground hurt.”

According to new outlet Jacksom Hole Buckrail, two balloons went down in a field, and the other balloon crashed further south, near an area with trees.