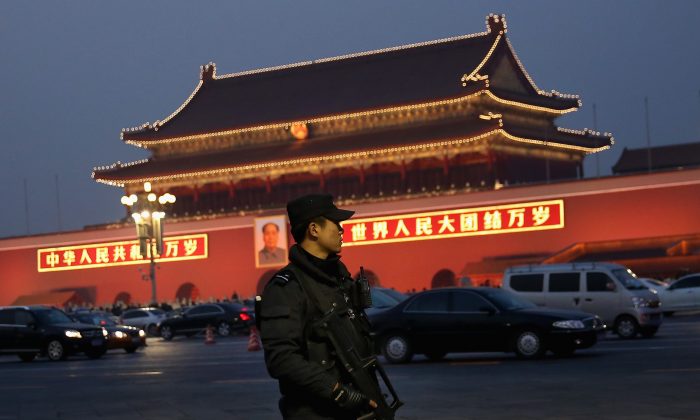 An anti-terror police officer patrols with his gun on Tiananmen Square on Nov. 8, 2013, in Beijing, China, part of the security in place for the Chinese Communist Partys the Third Plenary Session of the 18th Central Committee. At the plenum, which meets from Nov. 9 to 12, significant reforms are expected to be introduced. (Feng Li/Getty Images)
China

Three Sensitive Reforms Discussed at the Third Plenum in Beijing

The Third Plenum of the Chinese Communist Party’s 18th Central Committee has been anticipated for some time because of the reforms expected to come out of this high-level political meeting.

Among various reforms, Chinese society has in Internet discussions hoped in particular for land reform, state-owned enterprise reform, and judicial reform. Each of these is a thorny issue for the CCP, but Party mouthpiece media outlets have heightened expectations that something will be done on them.

According to China Radio International, a Communist Party mouthpiece media outlet, land reform is the most important issue to be taken up by the plenum.

It is not hard to see why. According to professor Sun Liping of Tsinghua University there were 180,000 mass incidents—protests or riots involving more than 50 people—in China in 2010, and the number has surely grown since. For the majority of these incidents it may be assumed that they were triggered by unhappiness over the confiscation of land.

Once rural land becomes state owned, it can then be sold on the market. However, local governments often pay very little compensation to the farmers whose land is taken, which has led to bitter disputes throughout China.

“The reform of rural land is the most significant reform. It will have a big impact on both Chinese economy and politics,” Shi Cangshan, an independent China analyst in Washington, told Epoch Times over phone. “Simply put, the reform of land is to let farmers have the right to sell their own land.”

The Party mouthpiece China Daily reported on Nov. 11 that a reform plan for state-owned enterprises will be announced after the Third Plenum.

“The reform of state enterprise system is not very meaningful,” Shi Cangshan said, “The focus of economic reform in China has been state-owned enterprise reform for 30 years since 1984, but nothing much has changed.

“The authority’s reform is to increase the power of the management department of state-owned enterprises, which is to meant to avoid having them grow too big and out of control, such as PetroChina. It’s not really reform but just an adjustment.”

According to Chengming, Li Keqiang pointed out the severe corruption and waste of public funds in these companies. “If there’s no rectification and no significant changes, a big blow will happen,” Li said. “No one can be responsible for that.”

The moves are also related to the Party’s factional politics. Those sacked for corruption were all tied to former security czar Zhou Yongkang. Zhou has been a leading member of the faction of former Party head Jiang Zemin, and the oil industry has been one of Zhou’s power bases.

According to China’s state-run Oriental Today newspaper, a new judicial reform plan will be released after the closing session of the Third Plenum.

Before the plenum started, China’s Supreme People’s Court published a statement advocating for the independent exercise of judicial power according to constitutional principles, and opposing local and departmental influence on the judiciary. Several Supreme Court staff members have also recently proposed that judicial power should be independent.

Shi Cangshan said, “The courts have been governed by the Political and Legal Affairs Committee at the same level [that is, a provincial court would be ruled by the provincial political and legal affairs committee, while a municipal court by the municipal committee]. The Chinese Communist Party directly manages the courts through the committees.

“This time, it may separate the courts out of the rule of city and province government. The courts will be still under the CCP’s control but will be directly managed by the central authorities.”

Chinese society has long wanted to see the abolition of the reform through labor system, which allows security forces to lock someone up in a labor camp without trial. The labor camps have in particular been used in detaining and torturing Falun Gong practitioners and other prisoners of conscience.

Last week, Oriental Today published a report claiming that the Central Political and Legal Affairs Committee has said the reform through labor system would be stopped pending the approval of the Standing Committee of the National People’s Congress.

The official versions of any reforms will likely be explained in a communiqué expected to be issued after the meetings close on Tuesday evening.