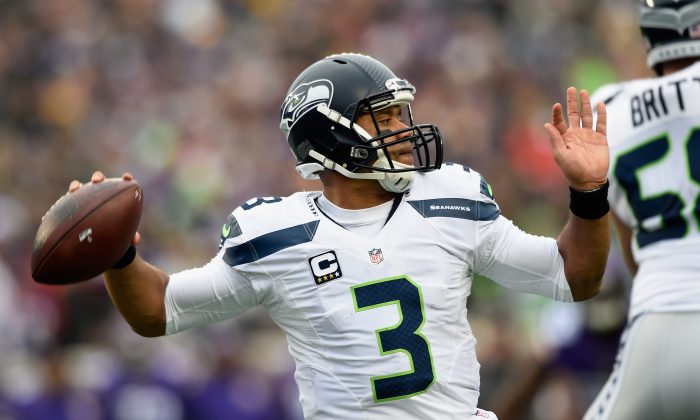 Russell Wilson has at least three TD passes—and no interceptions—in each of the past four games for the Seattle Seahawks. (Hannah Foslien/Getty Images)
NFL

Football is like stocks in the sense that a player’s value can go up or down in a given week. Here are three players whose “stocks” have sky-rocketed following NFL Week 14.

If old notions of Russell Wilson being a game manager still existed, they have all but been incinerated.

The Seahawks’ 35–6 victory over the Ravens in Week 14 solidifies a four-game stretch of mindbogglingly good proportions for the Seahawks’ signal-caller. In four games, Wilson compiled 16 total touchdowns—with at least 3 in each game—0 interceptions, a 70 percent completion percentage, and a passer rating of 145.9.

The 13 Best Players on the 13–0 Carolina Panthers

Part of Wilson’s explosion is no doubt attributed to the resurgence of the Seahawks’ offensive line. Considered by many to be the worst o-line unit in the league at the beginning of the season, the Hawks’ line has really started to mesh, giving Wilson the time and luxury to—perhaps for the first time in years—showcase his chops as a pocket passer. As while Wilson’s scrambling ability is a unique attribute of his, it is forcefully showcased due to a leaky line. As noted by ESPN’s Bill Barnwell, in 2014, Wilson was pressured on 40.9 percent of his dropbacks. Likewise, through Week 10 of 2015, Wilson was pressured on 40.8 percent of his dropbacks—the highest figure in the league by five percentage points.

Subsequently, with time to throw, what we have seen in the last four weeks is a quarterback who stands composed in the pocket, expertly reads defenses, and proceeds to deliver pinpoint passes. In essence, he has been picking apart defenses—consistently and to a phenomenal degree. From the above description, you would think that the subject was a traditional pocket passing great like Peyton Manning or Tom Brady. But at this moment, it really is the case that the two best, hottest, and most dangerous pure quarterbacks in the league are Russell Wilson and Cam Newton. Hence, the Seahawks and Panthers are major trouble for any team in the league.

As good as Russell Wilson has been playing, Mack’s performance in a divisional showdown versus the Denver Broncos was arguably the best single-game performance of the season. Everyone knows how good the Denver defense is; indeed, throughout the game, the Raiders O was entirely shut out. In fact in the first half, Derek Carr and Co. only managed -11 yards of offense. The fact that Oakland was able to etch out a victory in the second half can be attributed to two factors. One is the Oakland offense generating just enough life. The other—Khalil Mack single-highhandedly shutting down the Broncos’ offense.

To be precise, Mack wasn’t the only Raiders defensive player who played well. Fellow edge rusher Mario Edwards Jr. also turned in an admirable performance. But time and time again, viewers could not believe what they were seeing. In critical moments of the game where offensive playmaking was sorely needed, Broncos quarterback Brock Osweiler was hitting the turf repeatedly. And every time, it would be the same player who put Osweiler on his back—number 52.

Mack’s final statline for the game: 5 sacks, 7 tackles (6 solo), 8 QB hurries, and 2 forced fumbles, one of which resulted in a safety. All of Mack’s sacks came in the decisive second half.

Some say that the performance in effect lifted Mack to an elite level. But truth be told, Mack has been an elite player since day 1. In his rookie year, Mack was already one of the league’s top run stoppers at his position; his pass-rushing was good too, but as a rookie, it was the part of his game where the most work was needed. Today, with this single game, Mack has catapulted himself to the league’s summit with a league-leading 15 sacks on the season. It’s safe to say that Mack’s innate pass-rushing ability has been unleashed and on full display. So it isn’t that Mack has now become merely an elite player. He is now considered one of the very best players in the league and competes directly with the likes of Luke Kuechly and Aaron Donald for Defensive Player of the Year honors.

Though the Texans lost to the Patriots, the game saw Jadeveon Clowney total 7 tackles and 2 sacks en route to the best game of his young career. Now this is not to be confused with the likes of Wilson and Mack. Compared to the former two, Clowney just had an ordinary “good” performance, but it is a good performance with a lot of implications. Of notable significance is that Clowney’s coming out occurred during the same week that his positional archrival—by implication of draft—went bonkers at Mile High Stadium. By analogy, you could say that Clowney (the No. 1 pick in the 2014 draft) and Khalil Mack (the No. 5 pick in the same draft) are akin to the Manning–Leaf of defensive ends, though in this case both players are promising. It’s no surprise that fans are excited at the prospect of these two dominating the league for a long time.

From a team perspective, Clowney’s emergence could mean great things for a defense already featuring defensive player of the year J.J. Watt, and another capable pass-rusher in Whitney Mercilus. Watt is currently double- or triple-teamed roughly half of all passing snaps, but if Clowney himself develops into a rusher who demands double-teams, the offense really won’t have enough blockers to account for this. This would in fact catapult Houston’s defense to a sublime level, which is what they envisioned when they drafted Clowney on draft day.