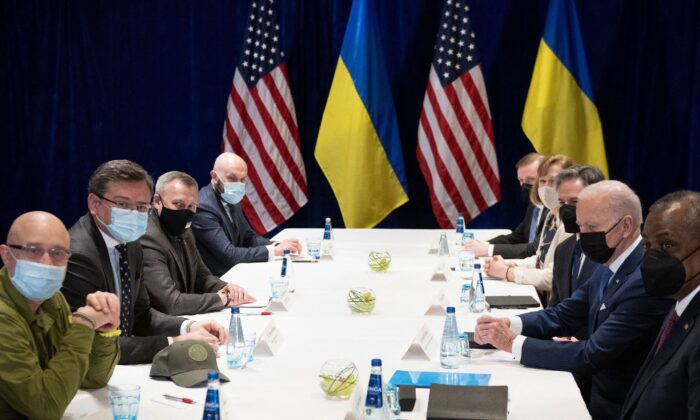 With the Russian invasion of Ukraine on Feb. 24 in direct violation of Article 2(4) of the United Nations Charter, Washington has shifted into overdrive to marshal support for Ukraine.

This includes an avalanche of speeches and the rapid passage of a $13.6 billion “Ukraine military aid bill” that was, fittingly (and ironically), the Potemkin façade for the Biden administration’s “$1.5. trillion spending bill that funds the government through Sept. 30.”

As posted on the House Appropriations Committee website, of that $13.6 billion “Ukraine supplemental appropriation,” only $6.528 billion goes to the Department of Defense:

The U.S. Department of State and the U.S. Agency for International Development received the bulk of the rest of the funding (around $6.77 billion), aimed at a plethora of humanitarian assistance and “migration assistance” for refugees fleeing Ukraine.

“Migration assistance” is a red flag, especially given the wide-open southern border of the United States. And sure enough, the Biden administration has announced plans to admit some 100,000 Ukrainians into the United States.

As a reminder, the above actions were reactive—not proactive—in nature, with the Ukraine supplemental funding driven by domestic politics as much as it was to actually “support Ukraine.”

World history did not start with the Russian invasion of Ukraine. The Biden administration’s deterrent actions leading up to the invasion were paltry and ineffective and may have encouraged Russian President Vladimir Putin to act.

It is entirely possible to contemplate, suggest, and advocate for the necessary ways, means, and actions by which Ukrainian sovereignty should be restored to pre-war conditions while, at the same time, questioning how and why Putin ordered the invasion—as well as to demand some accountability for ineffective U.S. actions to deter Russia.

Both sets of activities can be supported concurrently. Russia invaded a sovereign country, and the invasion must be reversed, and Putin (and others) should be held accountable. At the same time, several red flags associated with the Biden administration’s conduct need to be critically analyzed, and political and personal accountability administered as required.

Red flags abound in the administration’s actions related to Ukraine. They include the “migration assistance” cited above, dangling NATO admission to Ukraine (a Russian hot-button), slow-rolling the provision of military defense aid to Ukraine, the apparent absence of direct Biden-Putin communications during the Russian buildup (what is that Moscow-Washington hotline for if not to deter war?), and the Polish MiG (fighter jet) fiasco.

Three of the most glaring red flags are further summarized below.

According to Rand Corporation, a key aspect of deterrence “turns out to be about much more than merely threatening a potential adversary: It demands the nuanced shaping of perceptions so that an adversary sees the alternatives to aggression as more attractive than war.”

Real deterrence requires strong measures taken, not just vapid words. Putin’s perceptions were shaped by the weak and feckless actions (and non-actions) by the Biden administration from August 2021 through February 2022 (and continuing) that include the following:

The above actions were more like encouragements to Putin than deterrent actions!

What pain was promised to Putin?

What use of force by the United States/NATO was threatened?

Were the consequences of escalation clearly communicated to Putin?

Yet, in a stunning reversal, President Joe Biden responded to a reporter’s question about the effectiveness of sanctions.

Putin would wholeheartedly agree with Biden on that score!

Keeping the U.S. Embassy in Kyiv open would have been a critical deterrence action, signaling to Putin that the United States was serious about supporting—and enforcing—Ukraine’s sovereignty. Shutting down that embassy just ten days before the Russian attack could only have been viewed by Putin as a weak and feckless action indicating that the United States would not strongly respond to Russian military activity in Ukraine.

Those same “indications and warnings” of an imminent Russian attack that led to the decision to shut down the embassy should have concurrently led to an urgent provision of defensive military equipment to Ukraine. But the U.S. response was too little and too late to deter Putin.

Given the above actions and non-actions, this question must be asked: did the Biden administration’s decisions coax Putin to invade Ukraine?

Apply Occam’s razor to answer that.

Despite the admission of the ineffectiveness of sanctions by Biden, several unprecedented additional sanctions were enacted against Russia after the invasion. The sanctions under Executive Order 14024 and other subsequent actions under the International Emergency Economic Powers Act (IEEPA) have targeted individuals, banks, and other financial institutions, for example:

Why are the above considered to be unprecedented? By way of example, during World War II, the financial assets of German companies and banks were not subject to crippling sanctions. And banks in “neutral” countries like Sweden and Switzerland earned handsome fees for managing those assets.

For example, as previously discussed in an excerpt from the Aug. 15, 1945 edition of the San Francisco Chronicle, the Swedish banking house Wallenberg (through Stockholm’s Enskilda Bank) played both sides during World War II and accepted large commissions for safeguarding the stocks of German companies.

Questions abound that need to be answered by the Biden administration: what is the express purpose of these crushing sanctions on Russia in response to a regional war when Germany was not similarly sanctioned during a global war?

Why is a de facto all-out global economic war being waged against Russia without a public airing of the potentially adverse effects of those sanctions and actions on the United States and world economies?

Is the economic warfare and sanctions policy intended to force change in Russia through a “color revolution”?

How effective will these sanctions be when Russia requires EU nations to pay for Russian gas with Russian rubles, China continues to exploit lucrative trade deals with Russia, and India is potentially willing to import more Russian oil through a ruble-to-rupee exchange?

Is the real purpose of these unprecedented sanctions regime change in Russia? Read on.

Biden is continually verbalizing classified thoughts and discussions that have to be retracted later by his White House staff.

For example, during a recent speech to the 82nd Airborne Division in Rzeszow, Poland, he implied that U.S. troops would be on the ground in Ukraine, as Express (UK) reported on March 26.

His ad lib statement to the troops was clearly at odds with the existing response that is limited to economic sanctions against Russia and sending non-personnel military aid and economic aid to Ukraine. The White House staff was forced to quickly clarify that no policy change had been made to deploy U.S. troops to Ukraine.

But did the feckless remarks telegraph to Putin that this was indeed being considered?

Here is another gaffe that had to be “clarified” (corrected) by the White House staff. Biden stated that any Russian use of chemical weapons would “trigger a response in kind” that would depend on the “nature of the use.” One widely debated inference is that Biden suggested that he would consider the use of U.S. chemical weapons (nonexistent) in response.

Biden’s worst gaffe yet—and the worst red flag of all—was this one. During that same trip to Europe, he made off-script remarks that appeared to advocate regime change in Russia.

From Fox News: “’For God’s sake, this man cannot remain in power,’ Biden said to conclude his speech in front of the Royal Castle in Warsaw, Poland.”

Is the U.S. goal a regime change in Russia but not an alleviation of the suffering by Ukrainians?

Again, these remarks were also walked back, including by Blinken.

Here is an example of how the foreign press viewed the gaffe and its walk-back: “Farce as White House clarifies Biden assertion that Putin must be toppled. President was not referencing ‘regime change,’ says statement,” The Times of London wrote.

It has recently been reported that Ukraine’s leader is carefully considering Russian demands for ending the war.

According to Financial Times, “Ukraine is ready to declare neutrality, abandon its drive to join NATO and vow not to develop nuclear weapons if Russia withdraws troops and Kyiv receives security guarantees, President Volodymyr Zelensky said on the eve of a new round of peace talks in Turkey.”

This new position is also surprisingly close to Putin’s oft-stated goals in Ukraine.

The bottom line about Biden’s regime change gaffe was expressed by U.S. Sen. Jim Risch (R-Idaho) in a statement [emphasis added]: “My gosh, I wish they would keep him on script. Any time you say or even, as he did, suggest that the policy was regime change, it’s going to cause a huge problem. There’s not a whole lot more you can do to escalate than to call for regime change.”

The Biden administration’s actions on Ukraine are a collection of red flags. Did Biden’s public ruminations on Russian regime change reveal his real policy (fomenting regime change in Russia)?

Were the administration’s deterrence actions purposely doomed to fail in order to entice a Russian invasion of Ukraine?

All of the administration’s sanctions-related actions are focused on destabilizing Russia and its economy, with the inference that the “Russian people” would somehow act as a whole to end the war. And now a public statement that can only add to Putin’s paranoia and already significant concerns about his own personal safety.

What does Putin have to gain by ending the war except on his own terms if the U.S. policy is regime change in Russia?

Was regime change in Russia the plan all along?

What could possibly go wrong?