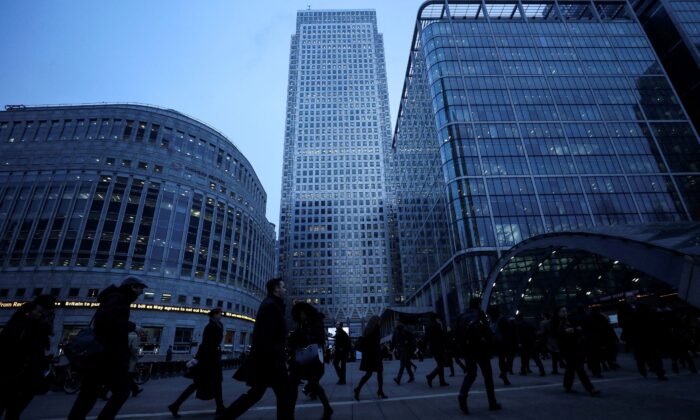 Workers walk to work during the morning rush hour in the financial district of Canary Wharf in London, Britain, on Jan. 26, 2017. (Eddie Keogh/Reuters)
UK

Three out of four workers in London believe they will never return to the office full-time after finding that working from home has improved their quality of life, according to a new study from the Policy Institute and King’s College London.

Researchers surveyed 2,015 London workers aged 16 and above between March 25 and April 13, 2022, to find out how they are working now and how they think working from home will impact the capital city going forward.

According to the study findings, three-quarters of London workers think they “will never return to the previous way of working where most people come into their workplace five or more days a week.”

Meanwhile, six in 10 London workers say they are now hybrid working, whereby they work from home for at least one day a week and from their workplace or office fewer than five days a week.​

Of those surveyed who were in employment prior to the COVID-19 pandemic, 37 percent said they had worked from home at least one day a week on average; a figure that has now roughly doubled to 75 percent.

The findings point to how the pandemic has drastically transformed working habits in the capital city.

According to researchers at the Policy Institute and King’s College London, a high number of London workers feel that working from home has had a positive impact and improved their quality of life, while not having to commute into the office is also proving to be one of the biggest benefits for 80 percent of those surveyed.

Working from home is also allowing employees to more efficiently manage their home and social responsibilities, according to the survey findings, with 71 percent of women more likely than men (60 percent) to cite this as a factor.

However, the survey found that people are much less likely to report feeling connected to others when working from home (45 percent) versus from their London workplace (79 percent).

Mark Kleinman, professor of public policy at the Policy Institute, King’s College London, said the results show that “it’s clear that London workers are mostly hugely positive about working from home” which he credited in part to “practical changes to their routines, such as avoiding commuting and being able to better manage other responsibilities at home” as well as “sess tangible factors” like gaining greater control and feeling more “connected to things that really matter to them.”

“But at the same time, it’s important to recognize that most still enjoy being part of a workplace, in particular seeing and meeting other people,” he noted. “London workers want balance—forcing people back to offices will not go down well, and the challenge for employers will be to keep teams engaged and connected while also respecting their new working preferences.”

The Policy Institute and King’s College London did find though that 16 percent of those surveyed believe that employees who work from home don’t work as hard as those who work from the office.

The latest survey findings come after a 4-day work week trial was rolled out across the UK on Monday, under which thousands of workers will work four days a week while receiving 100 percent of their pay.

The experiment was arranged by not-for-profit organization 4 Day Week Global in partnership with the think tank Autonomy, the 4 Day Week Campaign, and researchers at Cambridge University, Oxford University, and Boston College; aiming to boost productivity and well-being among workers.

A previous trial run in New Zealand in 2018 presented positive results, with engagement levels among workers increasing between 30 and 40 percent while work stimulation rose by 27 percent.