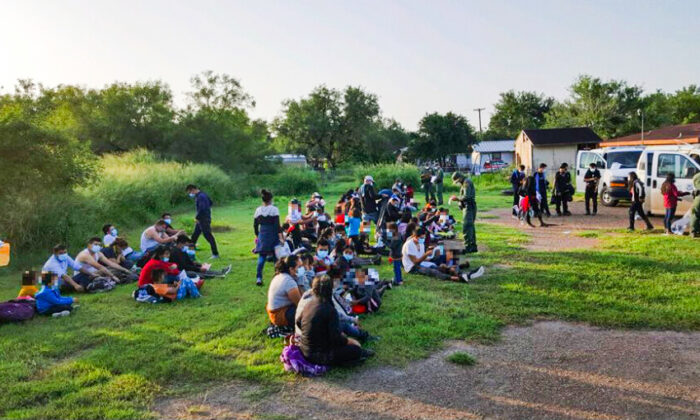 The U.S. Customs and Border Protection’s (CBP) agents stationed at the Rio Grande Valley (RGV) arrested three illegal immigrants affiliated with the MS-13 criminal gang on Feb. 7, along with another member belonging to the rival 18th Street Gang the following day.

The McAllen Border Patrol Station (MCS) arrested a Salvadoran national near the city of Mission, Texas, on Feb. 7 who admitted that he was a member of the Mara-Salvatrucha (MS-13) gang. He has previously been arrested in El Salvador for resisting arrest, according to a CBP press release.

Another Salvadoran MS-13 gang member was later discovered by MCS processing agents. The female, who showed symptoms of COVID-19, was transferred to a hospital. Agents at the Rio Grande City Border Patrol Station took into custody a third MS-13 member the same day who is also from El Salvador.

The individual was convicted of sexually assaulting a child in 1994, sentenced to three years’ probation, and was eventually removed from the United States.

A 36-year-old male member of the 18th Street Gang was arrested by MCS agents on Feb. 8. The man has dual citizenship from Guatemala and Mexico. He was living in Canada between 2017 and 2019.

The Biden administration had asked the Immigration and Customs Enforcement (ICE) to cease Operation Talon, which was aimed at removing illegal immigrants who have committed sexual offenses in the country.

In August 2021, there was a 1,400 increase in the number of sex offenders apprehended by border agents in Del Rio for the fiscal year as compared to the same period in the previous one.

Border Patrol agents in the RGV region have encountered over 137,000 migrants between Oct. 1 and Dec. 31, 2021, a 163 percent increase when compared to the same period the previous year.

During this time, RGV agents also seized more than 11,000 pounds of narcotics, which made up roughly 43 percent of all narcotics seized by Border Patrol across all ports of entry in America, based on a Feb. 9 press release.

As the illicit activities of the criminal gangs grow, they are using social media to recruit minors for smuggling operations in the RGV area. The criminals entice minors to drive migrants across the border, promising them fast cash and assuring that they will not face the same consequences as adults if arrested by law enforcement. New minor recruits also come from other areas like Houston and San Antonio.

“This is an alarming trend because many of these teenagers underestimate the severity of the crime. Not only can they be prosecuted and sent to jail, but they also endanger lives through their actions. I encourage parents to talk to their children and educate them on the potential consequences and dangers of this trend,” RGV Chief Patrol Agent Brian S. Hastings said in the report.

For the 2021 fiscal year, there were 1.73 million border apprehensions made by Border Patrol at the southwest land border. This is more than three times the 458,088 apprehensions in the 2020 fiscal.

Brandon Judd, president of the National Border Patrol Council, recently stated that a 150-mile border region of Arizona now only has four agents manning it when previously there were 75 to 90 agents.