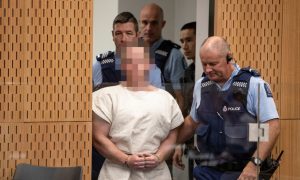 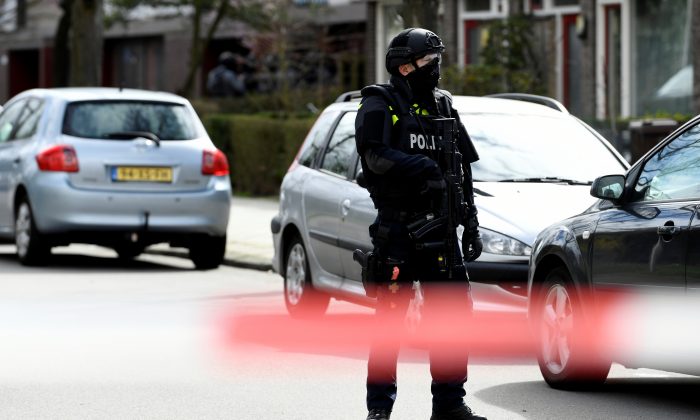 A policeman stands guard after a shooting in Utrecht, The Netherlands, on March 18, 2019. (Piroschka van de Wouw/Reuters)
Europe

Three Killed in the Netherlands in Suspected Terror Attack

Three people have been killed in the Dutch city of Utrecht in a shooting aboard a tram, in what authorities say could be a terrorist attack.

Police said gunfire had been detected in more than one location of the city, with five other people injured on the morning of March 18.

Police arrested a 37-year-old Turkish man, Gokmen Tanis, after engaging an extended manhunt for him.

Local media reported that the gunman escaped in a red car. It was later found abandoned around three miles away.

It wasn’t clear whether the attacker acted alone or whether there was a coordinated plan behind the shootings.

“We cannot exclude a terrorist motive,” Dutch anti-terrorism coordinator Pieter-Jaap Aalbersberg said at a news conference. “A lot is still unclear at this point and local authorities are working hard to establish all the facts.”

In a first for the Netherlands, the threat level was raised to five, the maximum level.

The attack took place around 10:45 a.m. local time. A witness told local TV he saw a woman on the ground shouting, “I didn’t do anything.”

Four men reportedly ran to help her but were shot at by the gunman.

Another witness said that “a man started shooting wildly.”

Mosques, schools, and local universities were evacuated following the incident, and police flew three helicopters over the area in an effort to locate the gunman.

Counterterrorism units surrounded a house near where the shootings took place but no arrests were made.

“Our country today has been jolted by an attack,” Rutte said, before the suspect was arrested. “The first reports have led to disbelief and disgust. Innocent people have been struck by violence … We are now doing everything we can to find the perpetrator or perpetrators as soon as possible. That is now our complete focus.”

One local businessman told BBC Turkish that the suspect had in the past fought in the Russian republic of Chechnya, a well-known jihadist haven.

“He was arrested because of his connections with [the ISIS terrorist group] but released later,” the businessman said, according to the BBC.

The suspect had a known criminal history, according to local broadcaster RTV Utrecht, including a shooting incident in 2013.

The current shooting happened in a quiet residential neighborhood known for its sizable immigrant community.

“It’s frightening that something like this can happen so close to home,” Omar Rahhou told Reuters. “These things normally happen far away but this brings it very close, awful.”

Prior to the arrest, Utrecht Mayor Jan van Zanen said: “Shortly before noon, a shooting took place on a tram in Utrecht around 24 Octoberplein. A horrible and radical incident in which victims have fallen. My thoughts are with them and their loved ones.

“The most important thing at the moment is taking care of the wounded and investigating the circumstances of the incident. We do not exclude anything, not even a terrorist attack.”

The attack follows the shooting of 50 people in two mosques in Christchurch, New Zealand, the worst-ever peacetime mass killing in the country’s history, and has been called an act of terrorism by Prime Minister Jacinda Ardern.