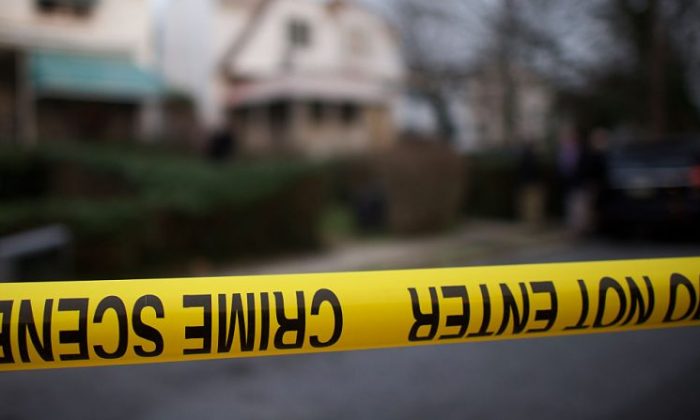 Three Kansas City, Missouri, officers were shot in two different incidents on Sunday. Officials said they’re now in a standoff with a suspect armed with a rifle.

Kansas City Police said in a statement at around 2 p.m. ET that there was an officer-involved shooting near Highway 40 and Manchester.

As tactical and undercover officers were conducting an investigation at a location, and they encountered a rifle-wielding suspect, who shot two officers. They were taken to a hospital and are in stable condition, officials said.

A “large police response” then began “searching for a suspect,” the office wrote. “The suspect fled the scene in a vehicle. That vehicle was recovered a short time later,” police said.

A third officer was later hit by gunfire and was taken to a nearby hospital, according to the office. The officer’s condition is not yet known, police said.

The Kansas City Star, citing a police spokesman, reported the third officer was shot during a manhunt for a suspect.

The person who is suspected of shooting the officers was barricaded inside a home around the 3000 block of Topping Avenue, according to the KC Star. “The standoff continues at this time. More information as it becomes available,” Kansas City Police also wrote.

“There is a large response from our department right now, basically every asset that we have to bring this situation safely to an end,” said Kansas City police spokesman Sgt. Jacob Becchina, the KC Star reported.

“It is a danger us, it is also a danger to the public and we want to bring this safely and quickly to a close and to an end. As much as possible we are working with all of our resources to bring this to an end.”

In elaborating on the shooting, Becchina told Fox4KC: “At 12:15, officers working an ongoing investigation at the Sky-Vu motel involved undercover and tactical operations. Two officers were shot there. Suspect fled in vehicle with one other party. The other party is in custody.”

Police are now investigating the party that is now in custody, the report said.

Earlier on Sunday, a Massachusetts police officer was shot and killed. Weymouth police officer Michael Chesna was identified as the officer who was gunned down in the shooting before 8 a.m. local time, MassLive.com reported. The suspect was allegedly fleeing the scene of a car crash near South Shore Hospital.

Police sources told WCVB that the suspect, identified as Emmanuel Lopes, hit Chesna with a rock in the head before taking his gun and opening fire.

There has been an officer involved shooting in the area of 40 hwy and Manchester. Large police response searching for suspect. Use caution in the area. Media responding go to old East Patrol Station 27th and Van Brunt PIO is en route. More info as we have it.

Approximately 12:15pm undercover and tactical officers were conducting an ongoing investigation at 8300 E 40 hwy. They encountered a suspect who fired on officers with a rifle. Two officers were struck and are at the hospital in stable condition.

The suspect fled the scene in a vehicle. That vehicle was recovered a short time later. Officers focused their search nearby the area of 30th and Topping. At that location shortly before 1pm officers once again were fired upon.

An additional (3rd officer) was struck by gunfire and was taken to the hospital. That officer’s condition is unknown at this time. The standoff continues at this time. More information as it becomes available