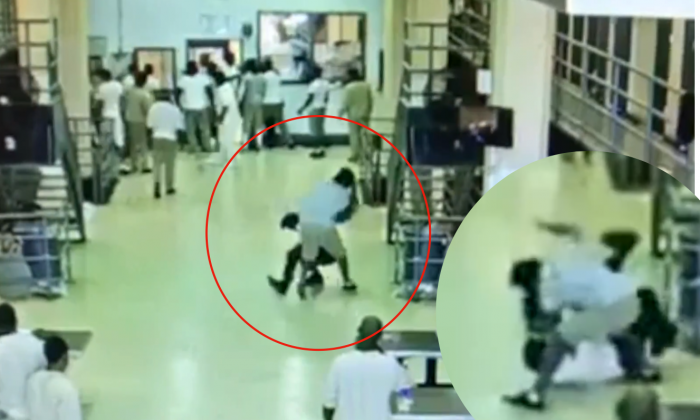 Security camera footage has emerged of a corrections captain being viciously attacked by three inmates at Rikers Island on Nov. 23, 2017. (Screenshot YouTube)
Crime and Incidents

A video has emerged of three inmates brutally attacking a corrections captain at the notorious Rikers Island jail complex on Thanksgiving Day.

The incident occurred inside the Otis Bantum Correctional Center—one of the many prison units housed on the island compound, reports the Daily News.

Surveillance footage shows Capt. Awais Ghauri, 31, walking along a corridor inside the institution with a corrections officer behind him and a muscular inmate wearing shorts, seemingly innocently strolling beside the two.

Suddenly the dread-locked inmate lurches toward Ghauri, winds up and lands a surprise punch to the captain’s face.

Ghauri drops to the floor. His assailant straddles the officer and delivers a barrage of strikes to his head and body.

The officer accompanying Ghauri goes for help, while inmates amass at the far end of the hall, and appear to prevent officers from providing effective assistance to their distressed colleague.

The vicious attack on Ghauri continues for about 20 seconds. The officer somehow manages to pull off a surprise reversal by flipping the attacker on his back.

As Ghauri delivers several blows of his own, two other inmates join the attack and strike the officer several times.

Moments later the attackers stop their assault and disperse, and an officer arrives to assist the captain.

Ghauri was treated in the hospital for bruises to his face and a several-inch cut below his ear but otherwise did not sustain any serious injuries, reported the Daily News.

According to pix11, Deputy Commissioner of Public Information Peter Throne gave a statement about the incident:

“We will never tolerate the actions of those who harm our staff and we are working with the Bronx District Attorney to arrest and prosecute any inmate involved in this incident.”

Attacks are far from isolated events at the troubled institution. Four inmates were injured just last week in gang-related slashings.

Glenn Martin, a former Rikers inmate has been crusading for closure of the 15-jail, 10,000 inmate complex.

“It’s just a really [bad] place that doesn’t foster rehabilitation and instead reinforces the kinds of behavior that get people in trouble,” Martin said, according to USA TODAY. “It reinforces the message that you have no value.”

“Rikers Island is an example and an expression of a major national problem. The mass incarceration crisis did not begin in New York City, but it will end here,” said Blasio, according to pix11.

While applauded by many, the expected closure does raise questions about what will happen to the thousands of prisoners serving their sentences at Rikers.

Watch this CBS report about a vicious attack on a Rikers Island corrections officer who was held down by two inmates while a third slashed his face and body.

Since it was established in 1932, Rikers Island has become a place notorious for violence.

Watch this ABC documentary about a day in the working life of a Rikers Island corrections officer.

Watch this ABC documentary about what life is like for inmates and staff at the maximum security prison Rikers Island.