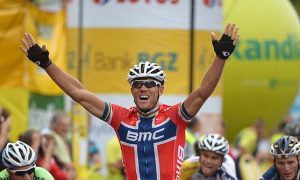 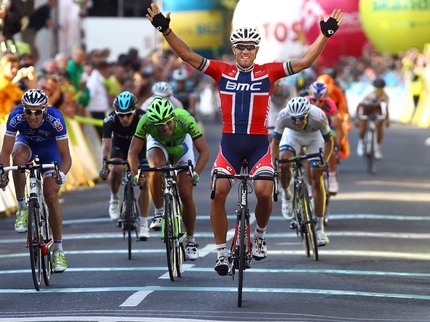 For the second time in three days it was BMC’s Thor Hushovd who proved to be the strongest rider when it mattered, as the big Norwegian won the uphill sprint at the finish of Stage Five of the Tour de Pologne.

“For sure, the sprint was a perfect one for me,” Hushovd said on the team website. “I knew if the group came back, I would have a good chance. The last climb was hard, but the team did a good job and everyone was working well together like we have been the whole race.”

Hushovd, who had a terrible 2012 season, has shown the world that he is back. The 35-year-old Norwegian Champion won Stage Three on Tuesday, while his team mate Taylor Phinney took Stage Four.

The win earned Hushovd the lead in the points classification. Despite the team’s three wins, BMC is only seventh in the team classification, where RadioShack has the lead.

Stage Five was predicted to be a day for the GC contenders, as the161-km stage was littered with climbs, three Cat Twos and three Cat Ones, with the final Cat Two just three km from the finish, which was atop a one-kilometer rise.

As it happened, none of the climbs were steep enough to make a selection. The breakaway was caught 26 km from the finish, and several small groups made motions like they would get away, but the peloton, led by Saxo and Colombia, was determined to keep control.

A strong group of Christophe Riblon (AG2R,) Maciej Paterski (Cannondale,) Darwin Atapuma (Colombia,) Robert Kiserlovski (RadioShack Leopard,) Luis Leon Sanchez (Belkin,) and Sergei Chernetski (Katusha) attacked 18 km from the line. Despite all that firepower, the peloton. Led for a while by Sky’s Bradley Wiggins rode at a tremendous pace and shut down the escape.

Riblon, with Euskaltel’s John Izaguirere and Lampre’s Jose Serpa, took another shot on the final climb, but couldn’t hold off the peloton, which rode them down at the two-km banner.

Team Colombia then moved to the front, but couldn’t stay there. Garmin sent a rider up to lead before Sky finally established Rigoberto Uran as the leader, with team mate Sergio Henao on his wheel.

Belkin’s David Tanner was locked onto Henao, but behind this trio rolled the mighty Thor Hushovd, still strong despite the day’s six climbs. As a power sprinter, he couldn’t have asked for a better final kilometer, and he made the most of it.

No one was eager to start the sprint; the incline, combined with 160 km of climbing, made it hard to judge how long one’s legs would last. David Tanner finally pulled right past the Sky riders; as he did in Stage Three, Hushovd waited.

After a few seconds Hushovd swung left and accelerated past both Sky riders and Tanner with ease. The Belkin rider had moved a little too soon and faded in the final hundred meters, while Hushovd had plenty of power.

The BMC rider eased up five meters from the line and still crossed a full length ahead of the charging pair of FDJ’s Matthieu Ladagnous and Cannondale’s Daniele Ratto.

The yellow jersey did end up changing hands. Euskaltel’s John Izaguirre, who started the day fifth, nine seconds behind Saxo-Tinkoff’s Rafal Majka, won the day’s ten-second Attractivity bonus and thus moved  into the lead. (The Attractivity classification, according to Cyclingnews.com,  combines the points earned on the days climbs and intermediate sprints. Izaguirre finished third and earned ten seconds.) The rest of the top ten stayed in order but lost a second, so the entire top ten is still within 19 seconds of the leader.

Friday’s Stage Six will offer a lot of chances for the order to change and the gaps to increase. The 192-km stage is composed of five 38-km laps around Bukowina Tatrzańska.

The route is non-stop hills with ten Cat One climbs—nothing alpine, but with the amount of climbing and the pace the peloton has been riding, it is equally possible that some riders will finally tire, and some escape, or that the whole show will once again come down to a sprint—though the route might be a bit too hilly for Thor Hushovd to grab a hat-trick.

Saturday’s Stage Seven time trial is also hilly. Quite possibly the whole race will be won by an inspired ride on the final day, but all the climbers will be looking towards Stage Six and a chance to get a gap on the field.