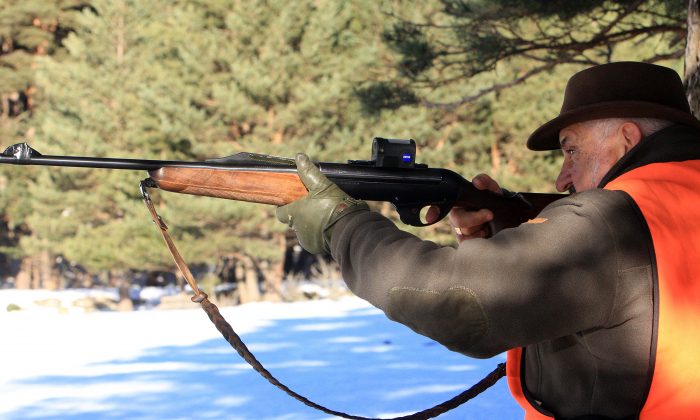 Considering the number of hunters which participated, the rate for hunting accidents was low in Wisconsin and Indiana on Nov.18, the first day of firearm deer season. (Raymond Roig/AFP/Getty Images)
US News

Deer-hunting season is underway in much of the United States. Sadly, some of the first kills were hunters.

Two hunting deaths were reported in Wisconsin—one was a shooting incident, the other was from natural causes. A third was shot dead while hunting in Indiana with a wound that seems to have been self-inflicted.

Three more hunters were wounded—all had accidentally shot themselves.

Considering that perhaps 100,000 hunters were out in the field last weekend in those two states, according to reports, the numbers are statistically negligible.

Saturday, Nov. 18, was the first day of Wisconsin’s nine-day gun-deer season. According to the Wisconsin Journal-Sentinel, about 600,000 people participated in its opening weekend.

The two deaths in Wisconsin were both in Marquette County, about 60 miles north of Madison, the state’s capital.

In one incident a Shawano County man was found dead on a private property in the town of Westfield, about 80 miles north of Madison. He had been hunting with friends.

One of his friends found his body, still in its elevated tree stand, at around 6 p.m. and called authorities. Firefighters from Westfield and the neighboring town of Oxford were called to retrieve the body from the stand, which was 16 feet off the ground.

A 57-year-old Marquette County man was found dead in the town of Newton, killed by a gunshot wound, the Journal-Sentinel reported. The man’s father found the body in his ground blind at around 6 p.m. The man was pronounced dead at the scene. No details have been released, but authorities are not looking for a shooter.

Three hunters were reported to have accidentally shot themselves on Wisconsin’s opening day, the Journal-Sentinel reported.

A 49-year-old man from Crandon was sitting in his truck at about 9 a.m. when he spotted a deer. While attempting to grab his rifle, he accidentally discharged it, sending a bullet through both his legs.

A 51-year-old man from Shawano County also shot himself in the leg. This man accidentally fired his holstered pistol while bending over.

In addition, Department of Natural Resources Warden Mark Little reported that a 49-year-old man hunting in Brown County shot himself in the ankle. That incident apparently occurred around 5:30 a.m.

Finally, the Indiana News and Tribune website reported that 58-year-old Thomas Zimmerman, of Borden Indiana, was found dead in his elevated deer stand while hunting in Harrison County, Indiana.

Conservation officers and other first responders used a rope and pulley to lower Zimmerman’s body to the ground.

Zimmerman had died of a single, close-range gunshot to the head. DNR officials are waiting on toxicology reports. They do not suspect foul play.