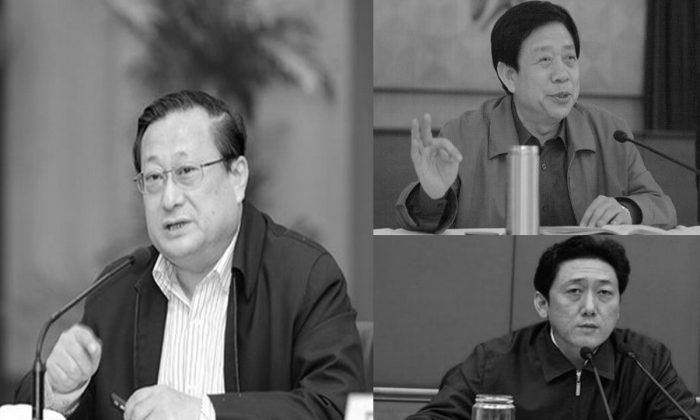 On Aug. 23, three high officials in northern China’s Shanxi Province were sacked in one day, the first “tigers” cracked down under the anti-corruption campaign since the downfall of former security czar Zhou Yongkang on July 29. A tiger is jargon in China for a high official targeted for corruption.

Nie Chunyu, the head of the Chinese Communist Party in Shanxi, and Chen Chuanping, the head of the Party the province’s capital, Taiyuan City, were investigated for “serious violations of discipline and law,” according to the Chinese regime’s anti-corruption watchdog, the Central Discipline Inspection Commission(CDIC), on Saturday morning. Nie and Chen are both members of Shanxi Provincial Standing Committee. The announcements of the two were only minutes apart. No details of their corruption has been released.

Ironically, Saturday’s front page headline on the state-run Taiyuan Daily, is about Chen hosting a city government conference to hear anti-corruption reports on Aug. 22. Both Nie and Chen reportedly both attended the Shanxi Standing Committee meeting the day before their investigation.

On the Internet, Netizens found rich material for mockery in the news report. “Corrupt officials hear an anti-corruption work report and host meetings to build a clean government. What great news!” wrote Fu Guoyong, a Chinese writer in Zhejiang Province in eastern China, on the Twitter-like platform Weibo.

“How could people believe what officials say on stage then?” wrote Lin Lushan, a Chinese scholar in southern China’s Guangdong Province, on Weibo.

Later in the evening of Aug. 22, Liu Suiji, the secretary of the Taiyuan City Politics and Law Committee, director and party secretary of Taiyuan public security bureau, and member of the municipal standing committee, was also investigated, according to the Shanghai news website The Paper. The Taiyuan Public Security Bureau announced the next day that the deputy director of the public security bureau, Wang Fan, is taking over the director’s position.

Reports of Liu’s corruption appeared last March on the internet, including information accusing Liu of stealing money, abuse of power, interfering with the real estate industry, protecting criminals, transferring money out of China through children studying abroad, having mistresses, and so on.

More than 2000 reports about Falun Gong practitioners in Taiyuan being detained, arrested, sentenced to prison, tortured, and even killed by police can be found on the Minghui website, which collects information about the persecution directly from mainland citizens.

For instance, a dozen Falun Gong practitioners in Taiyuan were taken away from their home by police due to their belief on Nov. 29, 2010, and were sent to an education center for brainwashing and conversion, according to a Minghui report.

Shanxi Province has suffered quite an earthquake among its officials since the anti-corruption campaign started a year and one-half ago. 5 provincial level officials and 14 city-level and department level officials in Shanxi have been sacked due to corruption. Deputy governor Du Shanxue and deputy chairman of Shanxi CPPCC Ling Zhengce were investigated on the same day on June 19. The deputy director of Shanxi Provincial People’s Congress, Jin Daoming, was investigated this February.