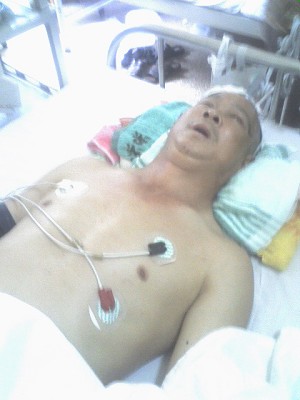 Fu Xiancai in hospital after being assaulted. (The Epoch Times)
China

Three Gorges Dam resettlement activist Xiancai Fu was beaten to the point of paralysis by unknown assailants on June 8, following an interview critical of Chinese authorities with a German television station. A German Ministry of Foreign Affairs spokesperson said the German embassy in China is requesting an explanation from Beijing.

The day of the assault, Fu was summoned for questioning by Zigui county police. There, according to Fu's wife, local Security Squad leader Xiankui Wang warned Fu not to make any further appeals or interviews. Following the appointment, during his walk home, Fu was attacked by several men who beat him severely, breaking several cervical vertebrae.

When The Epoch Times called Zigui police station, a man identifying himself as Xiankui Wang answered the phone. However, when the reporter identified himself and began an interview, the man quickly denied his identity and hung up.

On June 14 an Epoch Times reporter interviewed Fu Xiancai's family and his close friend Mr. Ruan. They are worried that the injuries will result in permanent paralysis.

“I am puzzled by the nature of his injury,” said Mr. Ruan.

“How could the hoodlums paralyse him without killing him? One who is not familiar with the structure of the human body is unable to achieve this and we are very surprised and suspicious of the location of the injury.”

A Fu family member said that Fu is still under close observation in the hospital. He has a high fever and temperature. A vital surgery cannot be performed until his fever subsides. At present, he is able to speak, but has lost control of parts of his body including his bowels. According to his doctor, the injuries to Fu's cervical vertebrae have resulted damage to his nervous system.

Fu's family and friends are also concerned about the huge cost of the operation recommended by Fu's doctor.

“We have already paid over ten thousand Yuan (USD 1250) and the hospital pursued us for another payment again yesterday,” said Mr. Ruan.

“I asked the local people for help but collected only about 1000 Yuan (USD 125) which is a drop in the bucket, but this is all that I can do.”

This incident has caused strong repercussions in Germany. The German Foreign Affairs minister expressed strong concern for this matter. A spokesperson said the Ministry of Foreign Affairs has instructed the German embassy in China to request an explanation from the Beijing government. North German broadcast station manager Jobst Plog expressed his strong protests to the Chinese ambassador to Germany Canrong Ma.

The Yangtze River's Three Gorges Project involved relocating over one million people from their hometowns. People in the neighbourhood of Yichang city in Hubei province were the first batch to be relocated. The evacuees were divided into two groups – the reservoir region group and the dam region group.

Fu was one of those forced to relocate and belonged to the dam region group. There were more than 10,000 people in total that were relocated from his area. They originally lived in the hillside areas rich in agricultural products. Here the land is fertile with abundant crops of citrus fruits, paddy rice, wheat, rape, etc. The farmers enjoyed a relatively high standard of living.

Now the villagers' lives are in a precarious state. The government did not arrange work for them and the farmers rely on paltry jobs to make a living. The Three Gorges Project has made these farmers' lives extremely difficult. Fu himself went to Beijing 15 times to appeal for compensation promised by the government.

According to activists' reports, in December 2002, the relocation workstation in Maoping town, Zigui county, tried to burn its accounting books to avoid scrutiny by the auditing department, covering up its accounting fraud. However, the 1994 annual accounting report was kept intact by concerned individuals. This report has become part of the evidence used in the appeal by those relocated from the dam region group.

On August 6, 2005, as Fu and four other villagers were leaving for Beijing to appeal, they were intercepted by Zigui police and were promised that the issue would be resolved. On September 20, the villagers left for Beijing again because the matter was not resolved. At that time, they were allegedly intercepted and beaten up. Fu said that a police officer threatened him:

“Xiancai Fu, be careful or you will be dead.”

The head of Maoping police station allegedly said to Fu, “If you persist in appealing against the local government, your family will not be left in peace, even your lives will be in danger. If you continue to appeal and contact foreign media, we, the police organizations, will detain you forever. I don't believe the Americans would attack China if we imprison you.”