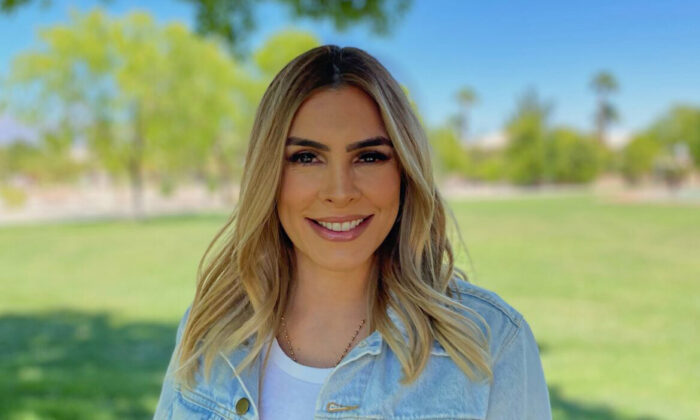 Republican Congressional District 1 candidate Caroline Serrano has garnered the most endorsements and money in her drive to win the June 14 primary election against seven other opponents. (D-Las Vegas). (Photo provided)
2022 Midterm Elections

LAS VEGAS,  Nevada—Three candidates have cleared from the rest of the pack in a heated Republican primary for a key U.S. House seat in Nevada: a Spanish-speaking daughter of Columbian immigrants who worked in Las Vegas’ hospitality industry for two decades, a certified financial planner and 30-year US Army veteran who espouses “wise water usage and infrastructure improvements” for a parched state, and a longtime “guy behind the guy” who senses, “I am right for this moment.”

Long the near-exclusive province of Democrats before the state assembly reshuffled the deck in post-2020 Census reapportionment, the former inner Las Vegas district now includes suburban areas to the south.

With its reconfigured demographics doubling the district’s number of registered Republicans to nearly 110,000, what had been a 2-to-1 Democratic voter bulge in CD 1 has been scaled back to a single-digit lead.

As a result, the Cook Political Report, which didn’t classify CD 1 as competitive two years ago only one Republican has been elected by district voters in the 40 years since Nevada gained a second congressional seat—ranked it “competitive but leaning Democrat” this year before revising it to “toss-up” in May.

Adding suburban and rural areas to the previously compact-blue Las Vegas district means five-term Rep. Dina Titus (D-Nev.) will face her most arduous reelection campaign in November against whoever wins the GOP’s CD 1 primary on June 14.

Although heavily favored to advance, Titus is the only one of Nevada’s three Democratic Congressional incumbents who must spend time and money fending off a primary rival before being confronted by what will be a well-financed Republican drive to unseat her come fall.

Who that is going to be is as much your guess as it is the contenders’ because there’s been little reliable, publicly posted polling at the district level, and, with eight hopefuls still vying for the nomination, conceivably, a winning tally could be less than 20 percent of votes cast.

Brog, 55, of Summerlin, who is president of Edmund Burke Foundation-sponsored National Conservatism group and executive director of the Maccabee Task Force, which combats antisemitism on college campuses, said his campaign surveyed likely district voters in April and learned “the race was wide open” with 75 percent saying they were undecided.

“We’re cautiously optimistic,” he said Thursday, noting the frenetic campaign pace of early spring has seemingly slowed in the days before the primary. “I sort of liken it to the calm before the storm.”

Not for Robertson, 62, of Henderson. “Things are looking good,” he said. “We feel confident, but we are not taking anything for granted. We’re meeting with voters, maybe three or four events a day.”

Nor Serrano, 37, of Las Vegas. “I think things are going really well. I feel pretty confident,” she said, adding polls can be inaccurate and lead to false confidence.

Plus with eight candidates in the race, “I do not know if anyone can be super confident” about who ends up on top on June 14.

“The reason why I feel good is I personally knocked on doors by myself” and in speaking with many voters over many weeks, many knew her name, but few other candidate names rang bells. So, Serrano believes momentum for her is “building up for sure.”

The bottom line, Brog said, is that the winner will be determined by “money and messaging.”

“We have spent more on voter contact, on actually reaching out,” he said, claiming his rivals spend money “on raising money or paying consultants. We spend it on old-fashioned voter contact. (His campaign) is the “only campaign with TV ads and direct mailing” in CD 1.

Serrano maintains she would be Titus’s “worse nightmare” in November because she speaks fluent Spanish and worked—as many of the districts’ constituents—in the hospitality industry.

“I’m 100 percent one of them,” she said. “Those connections really resonate.”

Plus, while Robertson and Brog are solid conservatives and espouse former President Donald Trump’s America First agenda like she does, as the chair of Latinos For Trump, “I’m the only candidate in this race who worked in his campaign,” Serrano said.

Robertson said he is “best positioned” to defeat the incumbent Democrat and is already “running against Dina Titus,” noting she “sought out an ambassadorship” from the Biden administration because she really “didn’t want to run again.

In eight months of talking with voters, he said the most significant issues for voters are “the economy—inflation, people paying more and more for groceries and gas—securing the border and election integrity.”

In Congress, the retired colonel would focus on education, water development, and energy policy.

“Nevada ranks on the bottom in education. That’s an issue that needs to be solved locally, not in Congress,” he said. “I would be in favor of eliminating the (US) Department of Education.”

Education is “better addressed by those who are running for local and state offices,” Robertson said. “It should be a state and local issue, not a federal issue. The federal government should not have any role in education. Those decisions should not be made in Congress in Washington, DC.”

“Wise water usage and infrastructure improvements such as desalination plants for agriculture. There should not be a drop of the Colorado River that reaches the Pacific Ocean,” Robertson said.

He said he would lobby for an appointment to the House Natural Resources Committee to advocate for Nevada’s mineral industry.

“Nevada also has the largest lithium deposits in the United States, but we can’t get it because the federal government owns 87 percent of Nevada,” Roberson said. “The people of Nevada should be able to benefit from the natural resources that are in Nevada.”

Serrano said inflation and immigration reform are the issues voters tell her most about.

“I’ve been here for more than 20 years, and this used to be a cheap state to live in,” she said. “Cost of living is a huge issue right now, and people, they feel the pain. We must cut back on government spending because (the inflation) is a direct result of government overspending.”

Voters are telling him the same things, Brog said, but he broke it down to “two levels.:”

“First, they’re fed up with inflation and gas prices, and they have an understanding that some of this is the direct fault of the current administration. They want competent leadership to do that,” he said.

Nevadans “are fed up with crime. They want competent leaders to stop that,” he said. “They are fed up with what is going on on our southern border,” noting the amount of fentanyl being smuggled into the country from Mexico is “an American tragedy” that “doesn’t get the attention that it deserves.”

Those are the surface issues, Brog said. “Underlying, undergirding it all is this feeling that the Far Left in the last few years have really seized the means” of government” by “taking over the base go one of our political parties and people want someone who is going to stand up to the Far Left.”

And that is what he’s been doing since he attended law school with classmate Barack Obama.

“I am not new at this stuff,” Brog said. “I spent a decade fighting the Far Left, decades fighting for Trump’s agenda” even before Trump had a plan.

“I have a biography that resonates with voters. In an odd sense, I feel that I am right for this moment based on what I have done in my life,” he said, noting he has worked on many campaigns as “the guy behind the guy for a long time.”

Brog said he’s also not afraid to go against types and grains, being a contrarian of sorts, “I am an observant Jew who ran an Evangelical Christian organization for a couple of decades.”

He worked with the late Sen. Arlen Specter, a contrarian himself. During his 60 years in various elected offices, Specter was a Democrat for 14 years, then a Republican for 44 years, and then a Democrat again for three years.

In the 1990s, Brog said he worked with Specter in making a “stand with the workers of western Pennsylvania” against cheap Japanese steel exports that drew criticism from free-market conservative Republicans.

When Trump supported imposing tariffs on other countries because of unfair trade practices, “what that meant to me was I have a place and a future in the heart of the Republican Party.”

Regardless of who wins the CD 1’s GOP primary, Robertson said at least one thing is obvious heading into the 2022 midterms: Democrats are not as engaged as Republicans are, at least so far not in this election cycle.

“The enthusiasm among Republicans is much higher,” he said.